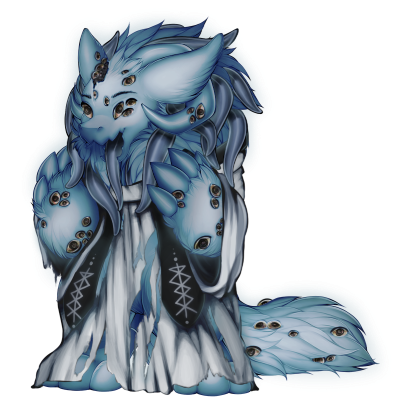 Paintie by Pyon
Art by Artorias Summary
Alabaster was once a man of the cloth, but his wandering mind led him to an untimely encounter with a celestial being beyond his comprehension. This meeting heralded in physical transformations as well as mental ones. Despite his hideous appearance, Alabaster is a gentle soul who wishes only to be left alone to his research. That is, if you catch him at a time where he has his wits about him.

History
The young priest was warned never to let his mind wander too far in the midst of intense prayer. It was forbidden, and surely nothing good would come of it. It was vital that they keep focused upon their savior, and always remained wary of the unknown.

For Alabaster, though, the unknown was tantalizing. Admittedly, the priest had always been a scholar at heart, but pursued work in the faith due to his father's insistence. When he allowed his mind to wander during prayer, he was able to learn things he never thought possible. The way this worked, it baffled the very mind. Still, Alabaster wanted more and the thrill of doing something forbidden was exciting in and of itself.

Soon, he became aware of a presence other than his own and the knowledge surrounding him. Surely, it was the source of this knowledge. This presence, though, was just that. A presence that filled him with wariness, but eagerness all in the same moment. Alabaster felt as though it was ever-watching, this feeling eventually permeating the physical plain. He no longer could just escape the dread by ceasing his prayer. It was beginning to consume him, mentally at least. He made the decision to hide away in his quarters and wait it out.

Alabaster's sudden paranoia and unwillingness to partake in prayer let alone leave his quarters caused alarm amongst the priesthood. Upon viewing for themselves the physical transformation that their brother of the cloth had endured, his sin was undeniable.

Locked away in the depths of the cathedral, Alabaster was left with very few options. He couldn't pray....for he had long lost the capacity to speak with anything other than the presence. His thoughts were flooded with this horror as well. All he could do was give into it, ascend.

This presence, in so many ways, it was like the god he was supposed to be praying to. But it's opposite all the same. Where his god was said to represent reverence and faith, warmth and love, the thing Alabaster had communed with possessed none and all of that. Alabaster revered it, though it never commanded such a foolish thing; faith was fruitless when one craved knowledge. Though it wasn't completely useless. Alabaster couldn't say the being loved him, nor could he say it hated him. Rather, in many ways, this thing simply "was" even without physical form or a voice to speak.

Upon escaping his prison, Alabaster hid himself away and began research, longing to uncover what exactly it is that has consumed his every thought. On many a occasion, Alabaster finds himself staring into nothing, only for several days to have passed in an instant. He isn't always himself, but vows to utilize the time that he is, and hopes that whatever damage he may do during times his mind is gone is simply a means to an eventual end of the madness he has faced.