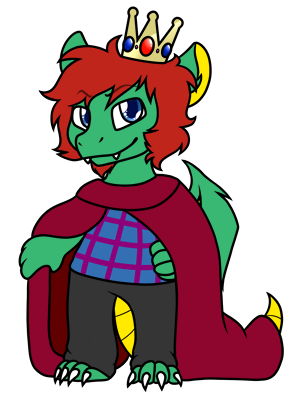 Biography
Bavaria von Müsinisch, referred to as "The Emperor" in the Eronigo Prophecy.
"Bavaria was created on November 21, 1994 from the fused DNA of Emperor Bremen Ratte Müsinisch and Empress Greding Blumen Müsinisch in the underground lab in Pannikuata. He was the first of the modern Eronigos to be created. Bremen and Greding really cared for Bavi and became the assumed prince. When Bavi was a kid, he really didn't like doing all of the royal stuff, so he went out and tried to become a normal kid. Of course, because of his role, everyone knew him. He tried really hard but no luck, but one day, when he was 8 years old, he met a Russian Eronigo known as Lazarus Pysty Okhotnik. Lazzi grew closer to Bavi and because of this, Bavi taught Lazzi self defense and combat. Bavi slowly developed more of a normal kid mind. However, at age 13, this all changed when Lazzi gets severely injured by the Glitch Souls during their attacks. Bavi felt like it was a bad idea to have a normal kid mind, so he tried to redevelop his royal mind. He cared for Lazzi until he recovered. Bavi tried to protect Lazzi as long as he could. However, when Bavaria was 15, his father died. Showing no remorse, he immediately became the new emperor. He was incredibly stressed about this, slowly disconnecting from Lazzi. He, however, became friends with another prince named Artici Meers Bergen, a sorcerer named Hypnos Aki Guifaw, and the king of Incuimanti named Anubis Giza Oba. A year after his death, his mother committed suicide because she felt like Bavi doesn't need a mother to rule with him. Bavi knew he needs a wife, but he also had more feelings for male Eronigos. Since then, Bavi became more introverted and started gaining tons of weight. During the events of Tale of the Dankiglic, Bavi was the one to save Revel. Bavi tries to care for him and returns him home, however, both of them get possessed by Hate. Sylas destroys Hate and he returns to normal. Today, he is trying to learn how to use a computer so he can contact Lazzi again."