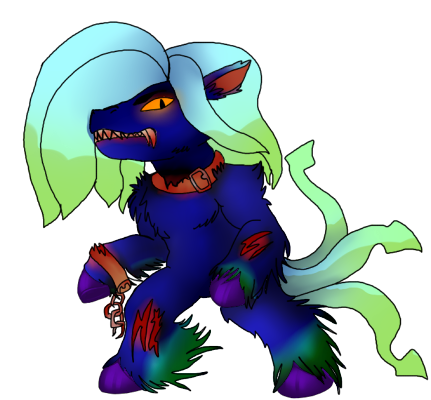 Abyys was born a Friesian black horse. She was loved, starred in multiple shows across the world. Performing her favorite talent; jousting. Abyys loved running towards other horses, ready to battle. Perhaps it was because she got to run, and the adrenaline running through her body. Or maybe it was the thought of battling an opponent, and getting the chance to prove herself. Whatever the reason, she liked it. Winning and losing countless times, and each and every day she tried bettering herself. Eventually, she was known as the champion. Others would fear her in battle, wondering if they even had a chance. Soon, during her battle in Canada, someone took her and tied her to a fence post. Unable to run out of the harness, she started to try and pull it off. It scraped her throat, choking her. Abyys chewed through, and got off of the fence post, but the harness was still on her. Not knowing what to do, she seeked help from an alchemist, to both take off the harness and heal her wounds. She came upon a large rat who emerged from the sewers covered in green and aqua slime. It looked like ink. As the slime oozed from his eyes and mouth, he swiftly took Abyys's hoof and brought her into the sewers. Without speaking, she let him take her to wherever he was going. They made it to the end of the sewer, where a large alchemist kit lay. Beakers, infusers, and a ton of other equipment lay out in an unorganized manner. Though, Abyys didn't care, she was grateful someone came to help. The rodent grabbed a small knife, and went to saw off the leather. After pausing for a bit, mid-swipe, he put the knife down. It eventually grabbed a potion, telling Abyys it will heal her wounds instantly. She drank it, and felt something spark inside her. Unimaginable rage grew inside her. Abyys couldn't control it. It consumed her. Eyes growing sleepy, Abyys passed out.

She awoke, bright light shone into her eyes. It hurt. Everything hurt. Her bones creaked when she moved, throat sore. Rage was all she focused on, however. Blinded by it. Her mane dripped with the same slime the rat had, it felt gelatinous. Every time she moved it jiggled, as well as her tail. It was odd. She needed to get out. Her eyes finally focused, and she was tied down by ropes. Abyys shrieked, sending a haunting echo throughout the sewers. Even the rat was startled. He grabbed a rope and pulled it tighter, scratching her. Abyys was fed up with this. Raising her hoof, Abyys scratched the rope until it broke. Somehow it was sharp. Her teeth were as well. Confused, she thought for a moment. "How did this happen?" It didn't matter. Continuing with her escape, she tripped the rat and ran. Winding through random passage ways which twisted and turned. Every corner an endless alley, ready to swallow her into an infinite abyss. She craved water. The ocean. Something that she could swim in. The sewer water was out of the question; she wasn't going to swim in it. Continuing running, she finally found the entrance, or, was it? Abyys climbed the ladder and broke out into broad daylight. The fierce rays burning her skin. It hurt her eyes even more than it did in the sewers when staring at the light. Without thinking, she turned toward the ocean and ran up to it. Her hooves clinking and clanking against the concrete road. With one large leap, she dove into the cold water. Abyys held her breath, but she realized. She had gills. Somehow Abyys could breath underwater. Her hooves churned in the water as she continued going deeper and deeper. Though, they barely did anything. After a while she remembered. Her mane and tail where some kind of slimy gelatin. Maybe it was tentacles. Flicking her tail, she realized that they were tentacles. Much like a squids. It pushed her faster into the deep depths of the ocean until she came to the middle. It was extremely dark. Though, she could still see. Her eyes seemed bio-luminescent in the dark watery abyss. She decided to change her name to Abyys, as she lived deep in the ocean preying on unwanted divers and fish.