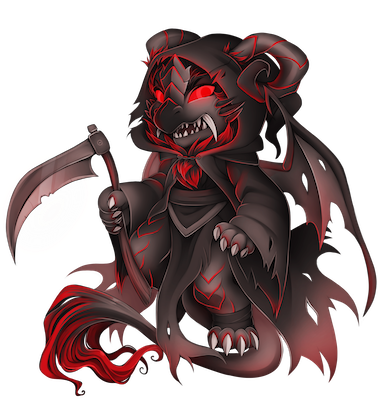 Bio is a work in progress!

Name: Erebus
Name Meaning: means "deep darkness, shadow" in Greek, and was often conceived as a primordial deity, representing the personification of darkness; for instance, Hesiod's Theogony identifies him as one of the first five beings in existence, born of Chaos. ~
His pet's name; Eir is a light and airy name ‘meaning peacefulness or mercy’ which suits her perfectly as when she is hungry, she only goes after the weak or sick to satisfy her cravings for blood.

Age: 19 years old (feral/realistic Dragon age is around 100? years working the kinks out on this part.)

Personality~
Positive Traits: He is very friendly, outgoing, kind and caring once you get to know him beyond his scary appearance. Loyal, trusting, honest, protective, he would do anything for his friends of whom he loves dearly and deeply as if they were his family. Daring, brave, adventurous and nonjudgmental: he does not judge others based on looks, as he would another being based on; what they say, what they do and by their overall personality to know, if they are a good person or not.
Negative Traits: He is often very shy upon first meeting since most judge him based upon his looks and think he's going to take them to their death. On the other hand, he can be hotheaded, stubborn and too trusting or willing to give others second chances, but only once for each person, as he has learned that some can't just treat you kindly, no matter how hard you try.
Can also occasionally be a bit too honest at times, but any true friend tells you the truth, no matter what!

Likes: Making others feel better when they get sick, making friends, being with his friends, WIP

Dislikes: Being sick, being alone (if he doesn't choose to be) WIP

Date when obtained:
Was obtained:/b] through a trade with WIP
[b]Came as: a Dragon wearing a Reaper costume (No plans to change that)

Paintie: None yet, maybe in the near future when I have the money for FD?