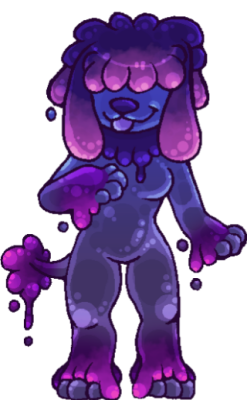 Rebecca is a larger than average poodle that was dyed a beautiful purple. She liked the color quite a bit. She was always a very happy and bright soul that would light the room when she walked in. But all of that seemed to change when an incident occurred.

Rebecca was very close friends with a skunk named Anias, and they were practically inseparable. They would play games together, write stories, take selfies... They did everything. That was until Anias left Rebecca one day. It was a slow process. She was getting ignored by her, then she even spread rumors about her. The next year of school at the time, she moved away and Rebecca lost all contact with her. That led Rebecca to go into a state of depression with self-esteem issues. How she was an awful friend, most likely because of how Anias left her in the dust. This depression caused her body to turn into a slimy substance. She hardly left her room and barely ate a single thing.

Months went by with very little eating before she eventually got the help she needed. While it did not help her become a normal dog again, she was beginning to feel happy again. She still has her doubts on mind about making friends because of the strong fear that they would leave her like Anias did.