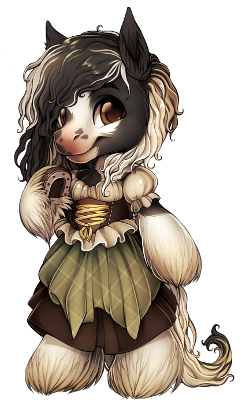 "Abraca-bugger-off and all that jazz!"

Avonmora has an obvious British accent. She picked this up when she lived in Britain for a few years.

During her stay in the United Kingdom, she became enthralled by witchcraft, and began to dabble in magic. She isn't a pro by any standards, but she is very proficient in casting temporary and permanent transformation spells. However, she prefers to help her roommates explore for items to sell far more than to use her magic to change others' appearances, as she knows that others mostly want to change their appearance for selfish needs that don't help anyone.
Avonmora was the one who helped Jingle Belle fully transition to female by using her magic to safely change her sex to the one that she wanted. She does the same thing for others who want to completely change their biological sex, or change other aspects of themselves to correlate with their preferred gender.