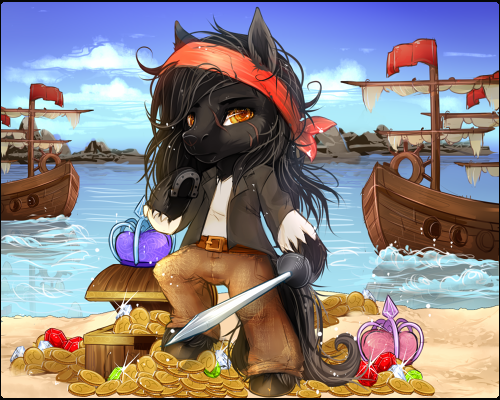 Alejandro the Bold is infected with Lycanthropy. Changes into a beastly monster after exposure to moonlight or especially frustrating board games. Howling at the moon relieves the symptoms for a little while, but use a Golden Apple for best results.

"Then shut yer trap an' go back to the boat... h'I don't need any yellah-bellied-furs messin' this up..."

Suddenly the young, quivering feline was shoved up against an adjacent wall, almost knocking over a nearby painting of a dark colored stallion and a young colt posing together.

"h'I'm gonna tell yer face one last time, ya lilly-livered kitten... Shut yer gab, or else me blade is gonna keep it shut..." The haggard looking jackal snarled, pressing his hooded muzzle close to the frightened feline's face. It was a crescent moon that night, and there was very little light coming through the curtained windows of the decorated and gilded home they were pilfering. The feline gulped audibly and slowly nodded his head, choosing to obey the immediate threat in front of him; he could feel the blade of the jackal’s pressing in between his ribs, and he knew the canine would not hesitate to use it.

Once again they began to slip soundlessly through the halls of that lavish house; the walls adorned with trophies and fine paintings, and the exhibit-stands of priceless treasures that lined the hallways seemed to be countless. All of which amazed and drew the attention of the young, impressionable feline, but the jackal ignored them all, as he only had one thing in mind, and he knew they were close.

After rounding numerous turns and navigating hallway after hallway, the two thieves finally came to their prize. One last turn lead to a short hallway, and at the end of that hallway was a circular room. In the center was a pedestal with a gold embroidered glass case on top. Inside of the case was what looked like an old, dusty map and a broken and bent compass inside.

"There they are..." Breathed the jackal as he cautiously began to move down that hallway, but right as he began the feline sprinted past him.

"Come on! L-Lets hurry up and grab it so we can get out of here!"

"No! Stop ya fool!" The cloaked canine barked as the feline ran down that hall, but he didn't get more than a few meters before a shadowy figure dropped from the ceiling in front of the feline. The cat only managed a short yowl of surprise before he was grasped and the cold touch of steel pressed against his neck.

"If you wish to live, leave now and never return..."

The feline needed no other cajoling. With a cry if dismay and fear, he dropped his shortsword and bolted back down the hallway towards the entrance. The jackal stood tense; his scimitar unsheathed and in hand as he watched the cloaked figure intently.

"You know... You should have gone with Diana from Ixtapia... From the market stall next to the fresh fruit? She would have been a much more reliable local sellsword than... whoever that was." The cloaked figure said in a low tone before removing the hood covering his face.

The jackal's scowl could have curdled milk.

"A-le-jandro... I shoulda known ya'd be 'ere..." He snarled, tossing his own hood off to the side to reveal the scared face of a seasoned mercenary.

"And I knew you would try to steal the map and the compass eventually, Aleixo... It was very difficult tracking you, you know…" said the stallion with a grin.

There was a moment of silence in between the two as they stared each other down, and then Alejandro spoke in a soft voice. "Are you going to make me do this? We could go our separate ways here, and I could forget this, for old-times sake... Or maybe we could talk about-"

Aleixo snarled and took his stance in front of his former friend; his scimitar held diagonally in front of him. "h'I'm not makin' ya do nothin'... old friend..." His words were colder than glacier ice from Tiger Eye Peak, and he subtly reached into his cloak and then suddenly threw a black egg at the stallion.

Alejandro reacted quickly and covered his face with his cape, but he knew he had to move fast! As the egg exploded and sent thick, cloying smoke into the air, he quickly removed his cape and threw in in front of him knowing Aleixo was charging him. The hallway was already dark with the only light being from the crescent moon, and the cloud of smoke only made it harder to see! With breath held and his eyes closed tight, he jumped back to get him out of that cloud of black smoke into fresh air. The second he landed and took his own stance, Aleixo was emerging from the smoke, tossing Alejandro's cape aside. He didn't stop charging though; with his scimitar firmly grasped in his right paw, he jumped high into the air before coming down with a powerful downwards slash!

Just in time, Alejandro held his sabre up to parry the attack, and the loud clang of metal meeting metal rang loud in the hallway. With practiced movement, Aleixo pivoted on his left footpaw and turned his downwards momentum to spin around. His scimitar ground against the edge of that sabre before sliding free from it and quickly slicing its way through the air towards Alejandro's head! With barely a moment to spare the stallion leaned back just in time to see the blade miss his muzzle by millimeters, and with a quick step back he regained his footing and begin deflecting the barrage of savage slashes from Aleixo. Alejandro knew how his former friend fought, but he found himself starting to sweat as Aleixo began to advance and drive him back into the circular room.


“Y… Ya took ‘er from me! I trusted ya… trusted ya more than me own mother ya hobbled pony!” Aleixo shouted; the pain was evident in his voice. This was no longer a fight about the treasure mere feet from their fight. This was about something personal.

Alejandro snorted gruffly, and then gave a shout of exertion and defiance as he swung his sabre at Aleixo to force them to parry, and then deftly switched his sabre to his off hand and punched Aleixo square on the side of their muzzle! The jackal gasped in surprised, and then received a firm kick to his leatherclad chest with a strong hoof that sent him skidding back! Aleixo stabbed his scimitar into the slick marble floor to slow his sliding backward which left a deep gouge in the immaculate flooring. Aleixo grit his teeth and groaned, and he glared at Alejandro before spitting off to the side to clear his mouth of the coppery taste of blood.

“She. Choose. Me. Me! You know this old friend, and I would have given anything to chan-“

“A… Aleixo? Alejandro? Is… Is that really you?” Came a soft voice at the end of the hallway, and it cut Alejandro off mid-sentence as he stared in surprise. Aleixo immediately turned around, ready to attack whoever was behind him, but his face turned into one of dismay and his scimitar clattered to the ground.

In front of them, dressed in a night gown, was a slender female feline of the purest white fur. Her perfectly groomed paws rubbed at her eyes sleepily, as if to make sure she wasn’t dreaming. “It is… It is you! Why… why are you here in father’s home?” A smile was starting to spread across her face, but then faded as she noticed their weapons clutched tightly in hand. Were they fighting…?

“Sofia! I… I thought you were on vacation at your summer home?” Alejandro asked in bewilderment as he took a half step forward. For the first time in years fear was slowly filling him as his eyes glanced to Aleixo. She was not supposed to be here!

The jackal could only stare speechless at Sofia in that moment though. She looked as beautiful as ever! How long had it been since he had seen her? Since… Since the day he saw her pressed against Alejandro in that tavern room, kissing him… She had betrayed him, his love, his trust… And now she stood here, looking at them with hope in her eyes… Hope! How dare she have hope after stealing all of his? All he had was her…

Rage flared up inside of him once again like a bubbling cauldron, and with a shout of pain, anger and resentment he swung his sword, but not at Alejandro. His scimitar smashed through the delicate gilded glass covering on the pedestal, and he quickly snatched the compass before Alejandro shouted as well and swung their sabre at him! Aleixo gasped in pain as the blade cut through his leather and dug into his side, and he jerked away before dodging Alejandro’s hand trying to grab him and sprinting as fast as he could to the nearby window. The jackal crashed through the window with a shower of stained glass and framing, and like a stone he plummeted off the side of the cliffside the mansion was perched on, into the churning, rocky water below.

“No!” Alejandro cried out in dismay as rushed to the window and peered over the side, hoping for just a second that Aleixo was holding onto the side… The stallion only saw the water of the ocean crashing against the cliff wall and the wood framing floating in the foamy water hundreds of feet below. Sofia was stood next to him with her paw over her mouth in shock and horror. Her eyes glanced over to Alejandro, and tears began to form in her vibrant blue eyes.


“Why… Why would he just… And you hurt…” Sofia started, and her voice wavered before Alejandro dropped his sabre and embraced her.

“He is angry… Confused… But he won’t listen…” He said to her in a soft voice, and Sofia began to sob into the charcoal black pelt of his chest as he looked out over the horizon to the slowly rising sun. Aleixo had managed to take the compass they had found together years ago, which meant the jackal could only be going to one place…