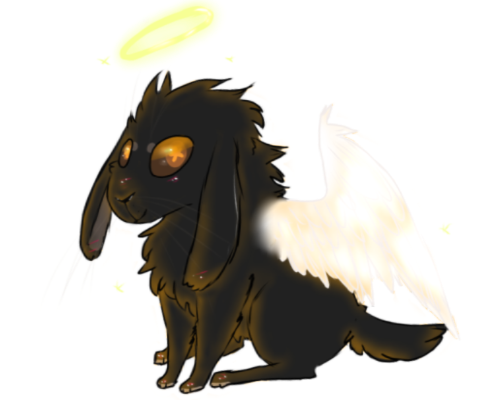 Peanut was a rabbit my mum and little sister brought home from a friend about 8 months ago, Eventually as she grew, she became very used to us and would even run up to me when I came home from school, much like how my previous pet, a super sweet German Shepard/Doberman mix called Molly would. Peanut was pretty lazy tbh, and spent what time she wasn't eating just laying around, much like a cat.

On the 4th of July, Peanut was very sick and had several seizures, one of them on me. We don't know what caused it in the end, rat poison perhaps?? EDIT: the likely culprit was a disease spread by mosquitos used to exterminate wild rabbits,,I don't know if this is worse than rat poison. Regardless, Mum and my little sister took her to the vet, only to come back at 5:03 pm with Peanuts body still wrapped up in blankets. We buried her that night near a tree, she was still warm.