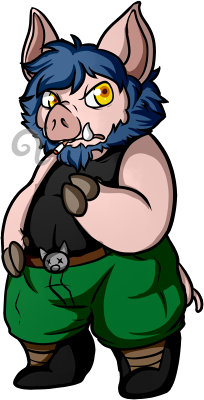 Paintie by Knights
Art credit here(FA)
General Information
A retired veteran in an alternate universe to our own in which WWIII befell the world. Riddled with ptsd and mounds of regret for those he's lost, Martin now lives out his life on the farm he and his childhood friend started up before they were drafted for the war. He's slowly trying to rebuild the life that he once had, but this endeavor continually proves difficult. However, stubborn as he is, Martin won't let himself mope the rest of his life away.

History
Martin never really wanted to be rich; his needs were far too simple for all of that. He never really wanted to be famous, either....as he could barely stand most others for more than a few minutes as it was. If he could sum up his own desires, it would probably come down to having a simple, comfortable life surrounded by the few folks he didn't want to strangle after just a short conversation.

It was in his senior year of high school that Martin's granddad passed away. Not caring for just about anyone in the family except for Martin, he left the farm to his grandson. The old man's passing was hard for him, as his granddad definitely fell under the category of "folks Martin didn't want to strangle", but he was at least thankful that he would have a place to call his own after school. One less thing for him to worry about, and hopefully the start of a relaxing, simple life.

Admittedly, despite the many, many hours the pig spent helping his grandfather tend to the crops, Martin could never say he particularly had a knack for that sort of thing. He could look after the livestock and he could hunt, but making a plant grow instead of die was just beyond his realm of ability. It turned out, though, that Rossi had a way with the crops, could really speak their language.


Rossi was the prime example of the phrase "strong as a horse", as he was definitely just about the strongest horse Martin had ever known. The big oaf could plow the fields without really breaking a sweat, without showing any signs of fatigue; he was just ready to go again after it was all done with. The Clydesdale spent time teaching Martin how to tend the soil and grow crops. Granted, all he really ever became decent at were things like radishes and greens; those things even a novice couldn't truly mess up.


Likewise, the horse and pig went on hunting and fishing trips together. It was never a long trip, as the lake and wooded area just outside of the farmland was always ripe with game. Rossi was a big guy, couldn't sneak up on anything to save his life. But he learned, with just about as much success as Martin could grow crops, anyway. It was always a wonder to the duo just how well their skills complimented each other. Martin could cook, but he was a bit of a slob (typical pig, Rossi had joked). Rossi, on the other hand, easily could burn water, but he was good at keeping things cleaned up.