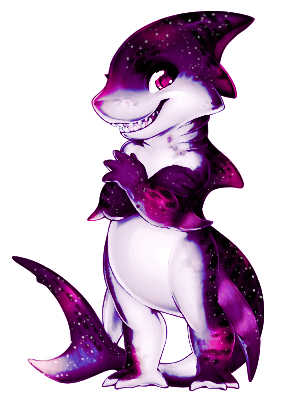 Lunafin is an unusual shark, with celestial markings peppering his skin and beautiful purple colouring, it is difficult to see how he is not unusual in a most extraodinary way. Of course, this seemed to have rubbed off on him, as he loves to watch the stars in the sky and go constellation spotting in his spare time. Despite being reminiscent of the stars, he does not like to shine and be the center of attention, as he is extremely shy. Lunafin loves to swim, and won't hesitate to disappear under the water for long periods of time. Adoring new friends, Lunafin is easily the most friendly looking shark for miles around, but has a difficult time trusting others. Lunafin hates the dark, because if he cannot see the stars, he is scared he will lose himself.

─━━━━━ ⋅⋆⋅ ━━━━━─
Ever since he was young, he was considered a beautiful shark. Yet despite his beautiful markings and coloring, being the center of attention has always made Lunafin uncomfortable. He’d much rather people be as intrigued by the actual stars as they are by his body. In fact, he had always been fascinated by the heavens; the sky, the stars, but also the thought of extraterrestrials. He swears up and down that he’s seen two flying saucers to his myriad of friends. Most of them don’t believe him, but they love him anyways. He’ll ramble on about how big they were and how foreign looking. Some of his friends are convinced that one of the “flying saucers” he saw was actually just a hot air balloon.

Sometimes Lunafin disappears for hours at a time, worrying some of his friends, but usually when this happens he is just out swimming. He loves the feeling of the water streaming around him and he’s captivated by marine life. Oftentimes, during the night, he swims upside down, looking up through the water to the sky, and imagines he is flying through the air.
His friends find him quirky, almost as if he has a tentative grip on social norms-not in a bad way, he’s just a little spacey at times. He loves to perform magic tricks but he’s awful at them and even he admits it. He loves watching magic even more and is entirely willing to drag his friends along with him to magic shows.

The one thing that Lunafin is truly terrified of is the dark. His friends know that when it is cloudy and it’s the new moon in the lunar cycle to expect him. He hates not being able to see the stars, and not being able to see in general. It seems that he gets scared that if the stars can be concealed, then he, too, can be lost.