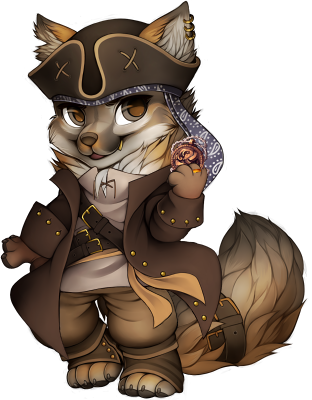 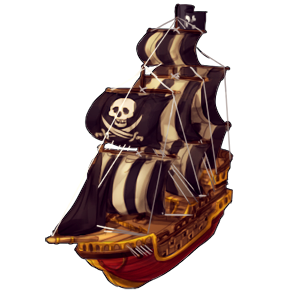 
There aren't many that haven't heard Captain Sinclair's name spoken at least once - sometimes in whispers, from admirers or crewmates, sometimes in angered shouts from the law after his tail. One thing is for certain.

Sinclair is one sly fox.

He is the captain of the Lost Lady, and is one of the only pirates to sail the seas with women on the crew. You know the rumor - t'is bad luck to have women on board a pirate vessel. But Sinclair doesn't seem to care; sometimes women just do everything better than men!

Rumor has it that he is the son of a nobleman and a pirate; the product of an affair while his mother was docked. He was purportedly born on-deck, and has been a pirate his entire life. His half-noble background is mainly portrayed in the way he speaks; when they were in port, Sinclair's mother often paid or begged the nobles of the port to teach her son how to speak properly. When with nobles, he used his full given name: Vulpiano Sinclair

He became the captain of the Lost Lady when the old captain - his mother - died. The first mate assisted him in captaining the ship until he was of age, as he was only ten years old when this happened.

Sinclair has a charming personality, but isn't above swindling and hustling to get what he desires. Overall, though, he is a very honest pirate.

On his middle left finger is the signet ring of House Sinclair - the noble house his father is the head of.
~~~~~~~~~~~♥~~~~~~~~~~~
Sinclair's Relationships
The Crew of the Lost Lady: Sinclair's crew is his family, and he'd be nowhere without them. The notable members of his crew are: Blitzkrieg, Galakrond, Levikos, Illythana (Bloodborne), and Seven.
Captain Kaizoku: The captain of the Lady Un and his crew are, in Sinclair's book, his friends. They get in a scrap and his crew can get 'em out? He's there.
~~~~~~~~~~~♥~~~~~~~~~~~
Paintie by snowfallen
Voice Claim: Capper Dapperpaws (MLP:FiM the Movie)
Theme Song: Main Theme - Pirates of the Caribbean