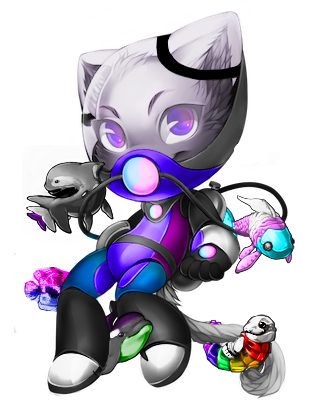 Relationship Status: Single and Open
Violet Wave is a bisexual feline who gets along with all sorts of sea creatures, and prefers to spend her time in the water swimming with friends of all sizes! She is an expert in the language of Whistle, and can communicate with most others that use Whistle as their first language. Though she lives in Dragonsmaw Manor, Violet have a very deep connection to the sea-this is because her lineage has a long history of living there.

Even back in the time of Aqualis, Violet Wave had relatives living in the ocean. Her family was a peaceful one, and played a part in constructing the great dome that now holds the town. It was her mother that was born in the ocean, and never felt like she had to leave. Violet Wave's mother met her father while exploring a beach along one of Oceandome's islands on one of her rare trips to land. Her father was a canine tourist who from Dragonsmaw Manor who was actually looking for a new town to move to. The two struck up a conversation, began to bond, and the next thing you know they were married and had their first and only daughter.

Violet Wave was one of the top students in her class, having picked up onto the study of the ocean quite quickly. She graduated with almost perfect grades, and went on to work at the Aqualis Bank. But the job didn't suit her, and despite her father's protests, quit the job in favor of a career as a Scientist in marine biology. This outraged her father, leading to a horrid fight between her parents that caused a divorce-being the final straw in an already shaky relationship. While Violet Wave's mother lives along the Great Furvilla Reef, her father chose to move into the central area of Oceandome, where the ground was dry. She still visits her father from time to time, although she is much closer to her mother.

Violet Wave is an aspiring artist, though has never had the guts to go beyond detailed sketches in fear of being judged. She cannot paint or sculpt, but can sing fairly well in both English and Whistle. Violet Wave doesn't like to eat meat, as she tends to make friends with any fish she hunts before she can actually kill them, and tends to stick to a diet of seaweed. However, if a friend or someone she is close to is attacked by a larger sea creature, and she has no way of solving the problem with a peaceful solution, then she will not hesitate to spear through the animal and keep the remains for food later on. Again, this is only in the direst of situations-Violet Wave is no great fighter, but can throw a steady spear with a strong arm if given time to prepare and aim.

Though she can swim pretty fast, Violet Wave isn't very competitive, and prefers to watch when watching swimming events such as the One Mile Race or other underwater activities. She does, however, like to play these games with others just for the fun of this, and does this fairly often due to having met her first girlfriend at one of the practice races.

Violet Wave has had multiple crushes on both boys and girls back in school, but only admitted her feelings to the opposite gender due to fearing others would see her as an outcast and think wrongly of her if they knew she was attracted to other girls. So Violet Wave had only ever gone on dates with boys until she met her first girlfriend at a practice for the One Mile Race, and after a long, fruitful relationship that eventually died off, Violet Wave still attends those practices in hopes she will finally meet her true love. Now that she is more confident, Violet Wave doesn't hesitate to state that she is attracted to both boys and girls, showing off her bisexual pride through the colors of her scuba suit and other swimwear.

After saving up enough money and gathering the courage and initiative, Violet Wave finally decided to move to the outskirts of Dragonsmaw Manor. She thought that a change a scenery would be good for her, and perhaps she could study any underwater life in the spooky town as well. Who knows, maybe she might find an entirely new species, or even a species thought to have gone extinct but had attempted to new waters to continue its survival! So Violet Wave met up with Rain, who was searching for more villagers to move into Silverflecked Village at the time, and the two struck a deal. Now Violet Wave lives in Silverflecked Village, happily continuing her job as a scientist.

Need to expand on this quote:
Gay, bisexual, asexual, pan, or something else entirely, this kitty loves them all!