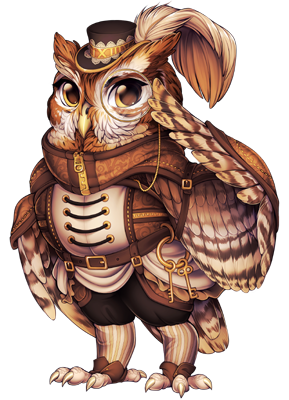 Marcellus is a sweet owl, liking nothing more than seeing others smile. He is a wonderful inventor, liking to make little crafts and sculptures out of anything he can get his claws on. He’s particularly good at metal sculptures out of things like nuts, bolts and screws. He also has a bright passion for blacksmithing, and is quite skilled in the art. The craft can be a bit difficult being an owl, but he’s happily up for the challenge. He loves to tell stories, whether they be true or simply fairy tales. He has a knack for it, and can somehow make even the most boring of stories interesting.

─━━━━━ ⋅⋆⋅ ━━━━━─
Marcellus was always a curious owl. Ever since he was young, Marcellus loved to toy with things and build things, which may not always turn out successful. Nonetheless, it was his favourite thing to do. To build. To craft. He later learned about the art of blacksmithing and began to teach himself how to do so. In his mind, it was just another craft discovered and another to master.

"What are you making there Marc?"

"A sword! What would you possibly need a sword for? The town is perfectly safe!"

"While there is no need for me to wield a sword, there's someone else out there who might need a sword. When I meet them, I'll give them my finest sword to use!"

Marcellus had heard about this new town that was founded by two brothers, both skilled crafters and one of which was a blacksmith. Perhaps they were willing to share their knowledge with him. With that, Marcellus set out towards Aurborage.

There, he did meet the two crafters. He even got to talk with them for a while. They talked about their projects and gave each other some tips and ideas. Although he was much younger than the two brothers, Marcellus quickly befriended them.

Then, chaos struck. The two brothers were no longer as close as they were. In a rage, one froze the town then left; the other tried to thaw it. With the work of the brother and of twelve other mages, the town was thawed. But since the houses weren't originally designed to hold that much snow and ice, well, even if it was just a short freeze-over, everything was a mess. Roofs either caved in or in poor condition, gardens wrecked, water everywhere.. Marcell had a new idea. He would create something that would help them in this situation, something that would help clean up.

And so, the x was designed. It gave off heat which helped the water dry faster and in turn, things were drier and much easier to rebuild. Although a seemingly simple invention, it was given an award and displayed in the town's museum as a great thing that helped them out of a mess,

Has he improved as a blacksmith? Who knows. Marcellus tends to keep to himself, always in his small workshop building something, whether it be something small or something grand and useful. Nonetheless, Marcellus is now an award-winning inventor, having created many things that made things easier for the town. Rumour has it that he even helped design the pillar that stands in the center of town.