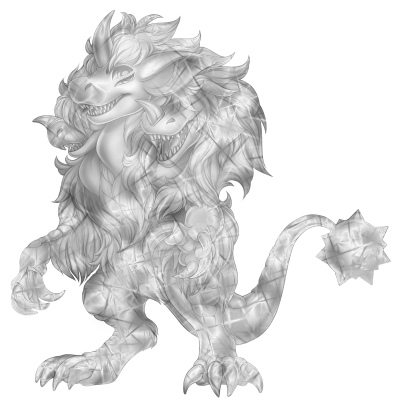 Sparkle has always looked beautiful on the outside, even when they were still made of flesh and bone and ugly on the inside. Sparkle started off as a dashing handsome but horribly vain and rude Flailadon, treating those he thought to be beneath him with great disrespect simply because they weren't as good looking as him. He carried this mentality around with him wherever he went in Olde Foxbury, putting others down and causing everyone around him to be put into a foul mood. He even sometimes went as far as to physically injure others-whenever someone bravely stood up to him, Sparkly would easily knock them down with a swift slash of his claws. And due to Flailadon's having both great strength and long dagger-like claws, he could do quite some damage. Sparkle had no friends, for the Flailadon's posse who followed him around to stroke his ego and cheer him on in brawls all secretly despised him, only following him around because they feared him and because Sparkle often took them along in the parties he went to. Plus, Sparkle only liked his acolytes because they were pretty, but not nearly as pretty as him of course.

Finally, the town had had enough. Hiring a witch, they set up a trap to stop Sparkle once and for all. His acolytes baited him onto standing on a podium, saying a very famous photograph wanted to photograph him. Sparkle just simply couldn't resist the allure of becoming famous, despite how catchy the whole thing seemed. As the mock photographer told Soarkle to strike his very best pose, the witch snuck up behind him and cast a spell. Sparkle was frozen without the time to even let out a scream. Their limbs became heavy and fur jagged, and they lost all of their previous color and precious details. As soon as the transformation had started, it stopped, and Sparkle was now a completely immobile-but still living-crystal statue. The town cheered and rejoiced, while the now trapped Flailadon let out a silent scream that went unheard. And so the crowd, in their celebration, carried the statue into the center of a large park and erected it for all to see and relax, for the vain beast would trouble them no more. It soon became a jungle gym for the kids, who would climb on Sparkle despite the jagged edges. Some would graffiti the statue, which went largely unnoticed and uncared for, and eventually-no matter the substance-whatever was drawn or written on Sparkle would wash off in the rain. On his podium was a simple plaque to remind everyone of the kind of person Sparkle was, and carried words of warning to those who wished to act as so: "In memory of a beast so vain the hurt everyone around them, now eternally beautiful but no longer living."

Of course, Sparkle actually was indeed still living. Sure, they could no longer move, eat, drink or breath, but they could still see and hear everything around them. Sparkle was forced to live out his days in eternal stillness, cold and bored out of his mind. Soon, he even began to regret his ways, his cruelty and the harm he had done unto others, but he knew it was too late to cry about it now. Until one day, a sorcerer Gem Raptor visited the park. They approached why everyone assumed to be the lifeless statue of the Flailadon, and placed their paw on the spot where his heart would be. It was faint, almost unnoticeable, but the Gem Raptor was one to pay close attention to all of their surroundings. And thus they felt it-the beating heart. The Gem Raptor offered to but the statue, and while at first the town refused, with a handsome enough offer they soon accepted, albeit not without some reluctance. The statue was really pretty, and a good target for rotting tomatoes, after all.

So the Gem Raptor, who went by the name of Ammet, took Sparkle back to Silverflecked Village where they presented the Flailadon to Rain and explained the whole situation. Rain said that she would allow Ammet to uncurse Sparkle and bring animation back to him as long as he promised not to treat her villagers as poorly as he had done to everyone back in Olde Foxbury. And, under the light of the full moon, he must return to an inanimate state and watch the town as a statue, both to keep a watchful eye out for any intruders and as a reminder to never forget his past aggressions. Sparkle gratefully agreed, and though they will never regain the fur and colors they had back before they were cursed, they are still thankful to be alive, to breath and eat and feel and enjoy all the little gifts that life has to offer. And now living is even better, because now Sparkle has true friends, with their closest companion being Ammet, the mage who rescued him from his lackluster fate.