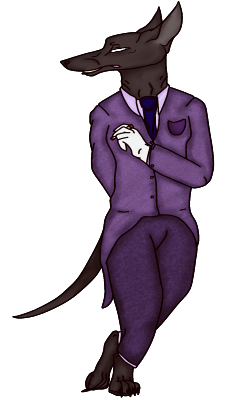 Inkwell is a demon who lives in a large manor on a hill just outside of the forest. The building does not reside within the borders of Silverflecked Village, but it does reside on its territory and therefore Inkwell is a legal resident of Silverflecked Village. Rain was visited one day by the mysterious canine, who wished to become a resident of her village but not live in close proximity to others. An arrangement was worked out, and even though Inkwell is technically welcome to come down and interact with the others who live in the village, for as far as Rain knows his track record is clean, no one has ever seen Inkwell down in the village. As a matter of fact, after their original encounter, Rain and Inkwell have yet to meet again. Of course, Inkwell could just be going down to the village while in a disguise of some sort, but Rain finds this highly unlikely as Inkwell seems to be the lone wolf type of person. Despite regarding Inkwell as safe for everyone to interact with, Rain forbids anyone from going up and knocking on his door for sales purposes, notices for events and such, and basically anything of the advertising sort. Flyers are usually just left in his mailbox, and nobody really knows for sure why. Perhaps it's because Starscape Child gave Rain some sort of warning about the demon, as the Manokit is usually right with their instincts, and they are one of Rain's closest and most trusted friends. The only person who really interacts with Inkwell is Fancy Bean, who was hired to grab them groceries once a week. The Dragling was chosen for the job because they easily follow orders and aren't disobedient, are pretty oblivious in all, and they don't ask questions. Anyone who tries to ask Fancy Bean something about Inkwell will be disappointed, because Fancy Bean in unwavering in their loyalty to their employer's confidentiality.

Inkwell has two forms; his regular form in the shape of a bipedal canine, and a much more sinister looking quadrupedal form made entirely of ink and dark magic. This second form is much bigger, able to grow twice as tall as Inkwell and very long, skinny and capable of slinking in the shadows without being noticed. This form can also shrink to be as small as a greyhound pup, though this is a rare occurrence for Inkwell hates to appear weak. While Inkwell is usually able to keep a sinister calm, in this form he is a vicious beast with no regards for mercy or safety. He can turn into the inky beast at any moment, yet only does so sparingly due to how much strength and magic is consumed in the process. For this reason, it is especially unwise to anger the demon, although truth be told, it was never wise to make him mad before he learned the spell anyways. For Inkwell is a demon, who is just as deadly as he is unpredictable and scheming.