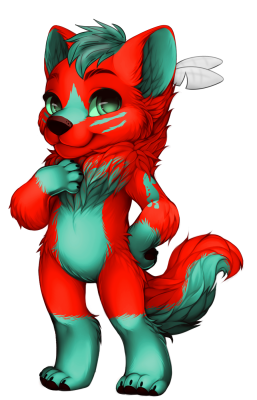 Kokopelli is infected with Zombipathy. Eating brains relieves symptoms for a time, but comes with memories of the brain's former life. Your doctor recommends adding hot sauce for extra flavor, but a Golden Apple a day will send the Zombipathy away.

Toyhou.se
Kokopelli is a fertility deity, usually depicted as a humpbacked flute player (often with feathers or antenna-like protrusions on his head), who has been venerated by some Native American cultures in the Southwestern United States. Like most fertility deities, Kokopelli presides over both childbirth and agriculture. He is also a trickster god and represents the spirit of music.

Kokopelli is very playful and happy-go-lucky. He hasn't eally figured out his sexuality but he doesn't let that bother him. He would rather be goofing around or playing with friends anyways. He is very mischievous and loves to pull small, harmless pranks, like switching the contents of the salt shaker and sugar bowl. He also loves music and is an exceptional flute player.

(( I really need to work on his personality and develop him more as a character.))