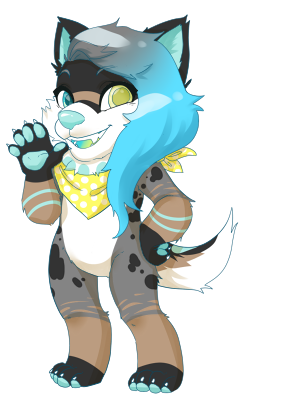 Kelly is infected with Lycanthropy. Changes into a beastly monster after exposure to moonlight or especially frustrating board games. Howling at the moon relieves the symptoms for a little while, but use a Golden Apple for best results.

Name meaning:
The name Kelly comes from the Gaelic tradition, and it means warrior. The name has evolved over time. Kelly is the English form of the ancient Irish Gaelic name Ceallach. It is also said to be transferred from the Cornish name celli, which means wood or grove.

Species:
The Australian Shepherd, often known simply as the "Aussie", is a medium-sized breed of dog that was, despite its name, developed on ranches in the Western United States during the 19th century. There is disagreement regarding the exact history of the breed prior to its arrival in the United States, and thus no official consensus on the origin of its name or association with Australia.
Information source @ [url=]Wikipedia[/url]

Obtained:
I bought her from my friend, Dallascitymouse . She came with her all of her art, both physical and digital as well as her villager and character rights to change anything that I wish. However I might not change her much as I really love her the way just the way that she is!

Credits:
Anthro paintie by Issac (currently equipped)
Feral paintie(s) by Dallascitymouse .
(I'm going to order her more painties of her, sometime later on, in the future as I love her that much!❤️)