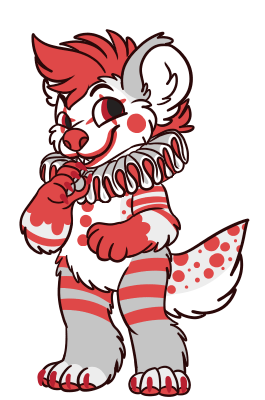 S-laughter is infected with Zombipathy. Eating brains relieves symptoms for a time, but comes with memories of the brain's former life. Your doctor recommends adding hot sauce for extra flavor, but a Golden Apple a day will send the Zombipathy away.

Did I mention kids?

"You can't spell slaughter without laughter!"

Laughter is probably the most common sound you're gonna hear out of this guy. If not cackling, he's probably speaking backwards, telling jokes (which will only evoke more laughter from him), giving hugs, or blowing you a balloon animal, and having the ability to imitate any sound imaginable certainly makes for some good party tricks. He's a clown, you can't blame him. However he's no laughing matter (pun very intended). His name isn't S-laughter for nothing. If aggravated his makeup will run, causing his personality to change from fun and friendly, to violent and rude. He also hates kids in this phase. Don't let your children near him when mad. You'll never see them again. After all...