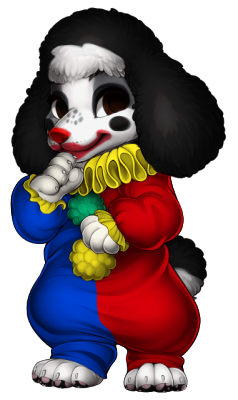 Pierrot's stomach is as big as his heart. If not, BIGGER, to be honest. He's well known for his unbelievable appetite and ability to never show any weight from it... It's what they always say: Dogs have bottomless stomachs.

His very picky palatte makes his foods taste more extravagant than regular dishes, due to his constant need to one up himself in the spice department. Every... single... time... he gets it just right; he gets bored of it. Oh well! Time to experiment again! (To the joy of his friends.)

He is pretty child-like and naive, personality-wise. He tends to view the world through an optimistic lens; often leading to disappointment when he realizes how bad it is. Pierrot isn't ignorant, more as to his knowledge is limited to certain subjects he's obsessed with. Ask him to divide by 20, he can't, but he sure does know a lot about animation history! Actually, numbers as a whole are just hard. They need to go away.

He tries to treat others as he himself would want to be treated. This... uh... tends to not end well at times for either party, depending on the situation, due to his lack of social empathy. Not understanding when to do things tends to be complicated for him to comprehend, but he's trying his best. ("If it makes ME happy, it'll make THEM happy!") ...why IS socialization hard?

Hates: The vet, the mailman, the UPS/Fed-EX/similar drivers, the garbage man, the school bus(es), anyone he doesn't know near his house, loud (sudden) noises, THE MAILMAN, cockroaches, spiders (minus tarantulas, oddly), not knowing how to swim, THE MAILMAN, large crowds, being alone in crowded places (agoraphobia sucks), anyone pronouncing his name (intentionally) as "Pier-rot"...