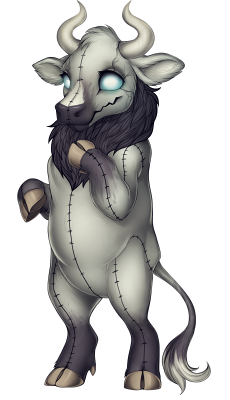 Ice Screamer 無 is infected with Zombipathy. Eating brains relieves symptoms for a time, but comes with memories of the brain's former life. Your doctor recommends adding hot sauce for extra flavor, but a Golden Apple a day will send the Zombipathy away.

-His mother was a cow and his father was a wickerbeast, a lineage he's proud of
-Died pretty gruesomely, tortured and then buried in a concrete crypt. Someone REALLY didn't want him getting out.
-BUT HAHA JOKES ON THEM YOU CAN'T STOP OL' SCREAMY
-Enthusiastic and energetic, especially for a zombie. He can't let his lack of pulse get in his way!
-Can be kind of absentminded though, as he is a zombie.
-Loooooves brain shakes. Slooorp.