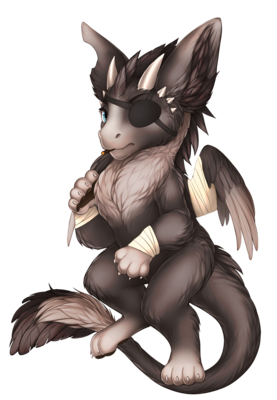 You walk into a blacksmithing shop to place an order for one of the nobles, he only takes orders from the nobles unless offered a lump sum of money. The loud clanging of a hammer against an anvil and the smell of burning coal fills the room as you enter. You wonder how anyone can stay in here for so long. As the large wood door closes behind you, the clanging stops, and heavy footsteps from the backroom make they're way towards the front.
"What is it?" A gruff voice asks. You notice the bandages around both his wrists and left wing and an eye patch over his left eye. A cigarette dangles from his lips as he speaks. His mouth doesn't open any more than a few centimeters to keep the cigarette in place. You say you're here to place an order for one of the noble families. He takes the paper order from your hands without another word. The pads of his paws were calloused and rough from years of forging weapons... and fighting.

Valentin, or Val, as he prefers, was always a fighter. From his days scrapping with his friends in the streets to becoming a warrior in the King's guard, he always had a competitive streak and an unmeasurable leadership quality. It was not until tragedy struck and a Flying Serpent tore the bones of his left wing beyond repair that he was honorably discharged from the King's guard at the rank of lieutenant commander. But still, his competitive and aggressive streak did not wane like the power in his wing. He had a thirst for an outlet to exercise his strength and power and found that outlet in boxing.
An entertaining fighter and almost unbeatable champion, Valentin "Steel Fists" became one of the most well-known fighters in the kingdom. Known best for his good looks and uncontested winning streak, he swept the stage and stole the hearts of fans all over. That all changed, however, when he took on the champion of the heavy weights, "The Beast". His fists were almost as big as Valentin's face. He ended up leaving the arena with a damaged eye, wrists, and ego. He never returned to boxing after that. Even bringing the topic up to him renders a sour mood worse than usual. He might kick your ass with the power he has left for just mentioning the name "Steel Fists".

From there, he took on blacksmithing for the nobles of the kingdom. He couldn't stand being sedentary even with all the permanent breaks in his body. Blacksmithing enabled him to make something from his anger. Something beautiful, something other's could use for the thing he loved most. Weapons crafting became a love for him. His damaged eye and wrists made things difficult, but it never stopped him.

Still, as you glance in the backroom with the flames and steel, you see a glimpse of a poster. The poster made for the historic fight between "Steel Fists" and "The Beast".
"No one's allowed back there," he growls, shutting the door before you can get a better glance.