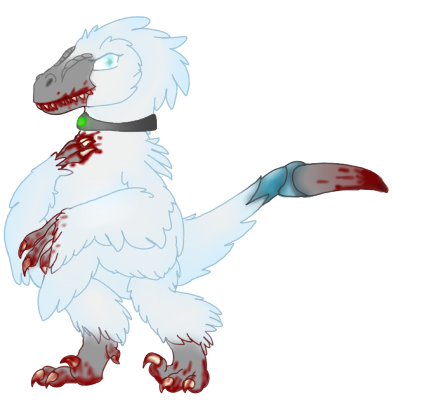 An angry Utahraptor who pretty much hates life.

Electrica, given the name from scientists, was raised without a family. She was made from a group of scientists, trying to find a way to bring back extinct species, as well as trying to find a new "weapon" for the military. Though, something went horribly wrong in the process. They tried to create a creature who would be able to understand allies, and attack enemies, while trying to make it stronger, faster. They succeeded in making it stronger and faster, though they screwed up and made it the opposite of friendly. When it hatched, it seemed normal, drinking a special formula that consisted of various milks and proteins. Though, when she grew up, Electrica was tortured. Her tail was cut at the end, and then "fixed" with metal that would be able to easily pierce through flesh. Her teeth was reinforced with metal, as well as her claws. She was kept in a small room with nothing else. Days upon days Electrica was left in that room by herself, only occasionally she would get food and water. As a baby she trusted the scientists, but as she grew, they became more and more evil. Eventually, they didn't give her food until she did what they told her. Of course, because of the genetic mutations, she wouldn't attack the scientists. Though, she became more and more aggressive each day.

Eventually, she started to understand the English language, and learned. She would sit in the room, thinking about an escape, or a way to survive this nightmare. Her feathers were bleached white that day to make her able to stand out from others like her, and so they could easily find her if she was able to escape. Electrica was then dragged back to the room. She understood what the scientists were saying, "Eventually she'll start trying to attack us if we continue."
"Not unless we destroy her brain before she gets the chance" 2 of them argued. She understood each bit, but tried to act as if she couldn't understand. Eventually, she was ready to train to battle. Dragged out onto the fields closed off with an electric fence that could kill with one touch. She knew she could die if she dared touch the fence, but knew there was a way out. The scientist who was training her seemed friendly, showing her treats if she did something right.

Though, Electrica was fed up with them. She took her chance and killed that scientist. Electrica ran at full speed and pounced, slashing viciously with her tail and claws. Other scientists flooded into the room, and stopped her with a "sleeping dart." Electrica woke in that same white room. She had a terrible migraine which made nauseous. Electrica ran to the door and scratched it, slashing the wood. Somehow her claws were able to get through and create a big enough hole to get through. However, around her neck was a heavy machine. It started to zap Electrica. It was extremely painful. Whenever she got near the door, the pain was worse. She was unable to escape with that machine around her neck. Electrica ran at full speed at the wall from the other side of the room, breaking whatever devices inside. Though, the green light still glowed faintly. She ran at the door again, jumping through the hole and was finally free. Though, scientists watched and chased her, attempting to stop her from breaking free. Though, Electrica attacked anyone who stood in her way. Eventually she reached the exit, and smashed the windows, forcing any scientists who managed to get near her to stop. Electrica survived and ran away, bleeding. Her head pounded, hurting more with every step. She finally escaped. Her instincts kicked in and she started looking for a water source and food. People stared at her, and called the police. Electrica ran to find a forest which had prey. Though, humans would be a good food source, she wasn't going to kill them from the high risk of others attacking her. So, Electrica ran from the large town and found a small forest which was closed off from society, where she created nests. Though, she was very aggressive to anything that came near her.