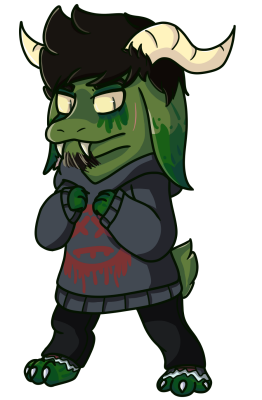 Retro is infected with Lycanthropy. Changes into a beastly monster after exposure to moonlight or especially frustrating board games. Howling at the moon relieves the symptoms for a little while, but use a Golden Apple for best results.

Retro is the main antagonist throughout most of Carmen's Arc in TotD. After being affected by Kirai, hosted by Kevin, Revel turned into a makoitta that was not like the others. He didn't feel like himself anymore and began despising others. Unlike the other eronigos, he found a way out of Pannikuata, however, he resided in an abandoned cabin for about a year in the woods, starving. He eventually started to rework the cabin and eventually started hunting for food. During the events of TotD, he was trying to lure Carmen to his cabin in Chapter 1, but she dismissed it. However, in Chapter 2, Davin, Logan, and her eventually encountered him, knowing he was still Revel. They stayed there for the night, however, Rex and Eric tagged along, realizing that Revel's been alive the entire time. However, things change at the end of Chapter 4 as Davin was attacked by Retro, leaving the scars around his eye, eventually slightly corrupting him. Davin then vowed to kill him. Retro is not seen until Chapter 9 where he leads the group inside the void, where at the end of Chapter 10, turns back into Revel.

Retro's role during TotD: Visions onwards is minor, but acts as Revel's demon and still haunts him during his dream segments.