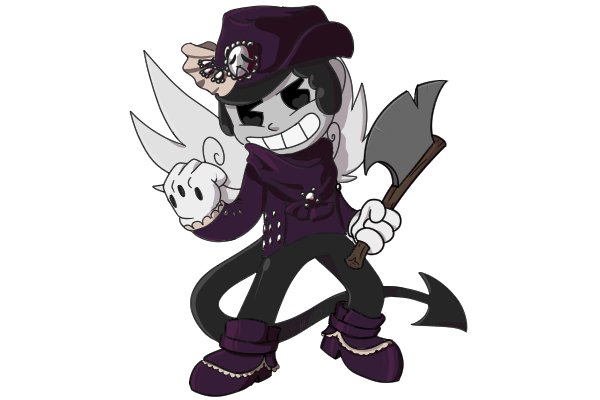 Ray is infected with Vampirism. Symptoms include craving blood, sensitivity to sunlight, an allergy to garlic, and changing into a bat after especially forceful sneezes. If they start to sparkle, immediately consume a Golden Apple to cure the infection.

-Below is secondary story / new story in process of being written-

Ray is a Toon guy that is generally very nice and easy to get along with. You can wrong him countless times, even killing him, and he'll still forgive you for it. If he dies he is able to respawn, normally from ink.
Before respawning he just wanders around as a ghost until he finds a source of adequate amounts of ink.
He is caring and willing to self sacrifice if needed to save someone. This is why he's asked to babysit often, as he'll protect that kid no matter what danger he's put in. Even if that danger is caused by the child. That's just what happens when you babysit demon and monster kids.

However as nice as Ray is he does have a secondary side that opposes his normal personality. This is not a 'separate personality' but rather parts of himself he doesn't like so he locks them away. This became a problem when these bottled up personality flaws turned into a sort of second Ray. A separate entity that shares the same body. If Ray is under a lot of stress and falls asleep or is knocked out, these 'negative' personality traits take over in a magnified state, making him a sort of monster. He has no memory of these events when he wakes up. Think of a werewolf, but instead of a wolf its his current emotional distress in a physical form.
During these 'attacks' he can cause a lot of damage and harm, so he's paranoid about hurting anyone that he cares about.
During these attacks he is literally blind, so he can be avoided as long as you don't make any noise. Any sounds will attract him and he will pursue and attack whatever is causing the sound, even if its just a dripping sink faucet. If he's talked to during this time and it's someone he knows well he 'may' snap out of it and wake up. Its not guarantied though....