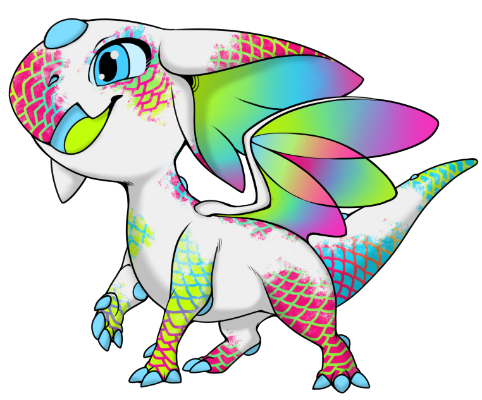 Prisma is a Bonbon or Fairy Dragon, known for being a passive and lovable species that couldn't hurt a fly! Well, okay, Prisma could definitely try to hurt more than a fly, but it wouldn't go too well. The Bonbon's skin is as soft as a marshmallow, and their spikes and claws are like gummies. They are usually only about the size of a bird, and will attempt to eat basically anything! They have delicate wings and large ears to help detect and escape from predators, in which there are many as the Bonbon is a very easy catch. This is why what Bonbons do live in the wild, as most are kept as pets, are very secluded and untrusting to others. It is a rare sight to see one, and only in a place that is safe for the species might you finally see one. This is where Prisma comes in.

Prisma, for most of her life, has lived in The Guardian's Sanctuary. As it was the perfect safe haven free of predators or any creature that might wish harm to Prisma, it was the perfect abode for her species. She was born there, raised there, and taught by all her friends and family that the Sanctuary would forever be her home and she had no reason to ever leave it. And for a time, Prisma believed this. But as she began to grow older, unlike the rest of her species, Prisma began to grow discontent with her life. Certainly there had to be more? Sure, Sanctuary was vast and beautiful, free of danger and with plenty of places for her to frolic and explore, but sometimes it could just be so... boring! Where was the thrill of adventure when in the back of her mind, Prisma always knew nothing bad would happen to her? She wanted to experience something new and exciting, and had her heart set on leaving Sanctuary one day. She knew it was possible-her elders had always shared stories of the dangers outside of Sanctuary, and she had also seen The Guardian enter and leave Sanctuary from time to time through a mysterious portal. All she had to do was wait, and her time to leave would soon come. And then, one day out of nowhere, Rain showed up.

The appearance of the intimidating reaper dragon had certainly caused a disturbance amongst the Bonbons. Rain was like nothing they had ever seen-with dark scary colors, large tattered wings, and nightmarish claws and teeth, the reaper dragon was like something right out of the horrifying tales the elders would tell! So while the more daring and carefree critters would dart close to the dragon without a second thought, the Bonbons were all huddled away and watching suspiciously, for even in a place without predators they were still full of fear. All except one. Although Prisma did not directly approach Rain, she didn't try to avoid the dragon or hide from her either. She watched, fascinated, as the fearsome-looking beast with those huge fangs, sharp claws and powerful wings casually strolled around, playing with a few critters and eating the fruit that grew on the trees. As if she had no intention of hurting them. And then Prisma had a thought-might the outside world had changed? Sure, she knew there were still monsters-the scythe that Rain was carrying was definitely not just for show-but might creatures that look scary be kind like the reaper dragon? Prisma knew her family would not let her leave if she tried to tell them, so she had to make a tough decision; follow Rain out of Sanctuary without saying goodbye to those that had loved and raised her, or stay in the Sanctuary and never find out what it was like outside. With a heavy heart, Prisma chose the first option.

Prisma sat in waiting, watching as the reaper dragon's movements became slower and more relaxed, lacking the curiosity and excitement they had carried before. The dragon had eaten her fill of the fruits, drank the water from the crystal clear springs, and observed all the wondrous creatures living in the paradise. She had been tired before, and now, with her stomach full and adrenaline ebbing, a calm fatigue was beginning to set in. Prisma watched as Rain settled down on a patch of small grass and drifted off into a peaceful sleep. With the reaper dragon finally asleep, Prisma got the courage to stray from her perch in the tree and settle down in a bush next to the dragon. And soon enough, The Guardian came padding along towards the dragon. Using a magic force Prisma had no knowledge of, the rabbit levitated Rain in the air and began to walk back to whence they had came. Prisma sneakily followed along, darting in the brush, looking out for the portal that would lead to the part of the world filled with dangers beyond belief. And there it was-like a stagnant onyx pool with depths filled with blue and green stars. Rain was levitated through it, and The Guardian soon followed after, waving their arm to close the portal behind them. Prisma saw her chance, and after taking a deep breath, dashed into the closing portal.

For a moment, all was still, and then Prisma was tumbling onto grass. It wasn't like the grass the Bonbon was used to-it was pointy and scratchy and much darker in color. In fact, everything was darker. Looking up, Prisma saw tall, looming trees with needles for leaves, ominously blocking out the sun so that only a few scattered rays could reach the ground beneath. There were no happy chitters of colorful songbirds, only shrieking caws and cries that came from the various dark shadows dashing about in the treetops above. Watching, waiting. Prisma wasn't sure she liked this new world, and a pit of regret and dread began to grow in her stomach. But then she heard a musical tone behind her, and turned to see The Guardian. To her surprise, the rabbit didn't seem angered that she had wanted to leave, although it was hard to tell due to the fact that they didn't have a face. The rabbit stood still for a moment, and then made a gesture with their arm in a direction leading away from the temple. Prisma stared at them for a moment, before nodding slowly in thanks, and running in that direction.

Despite being small in size and with stubby legs, Prisma was able to bound at a surprisingly fast speed. She was light, her dainty wings were outstretched to catch the air, and adrenaline was running through her veins. She trusted The Guardian with all her might, and had faith that they would not lead her astray. Revenge was not what The Guardian stood for. After what seemed like an eternity of running, Prisma saw a clearing. Filled with resolve, she forced herself to push through and make it to the end. Bursting out of the derelict and darkened forest, Prisma stood on a hill, sunlight warming her scales as she stared down onto the village below. It was bustling with animals she had never seen before, which stood upright just like The Guardian had. They were all walking around on paths that looked like smooth stone, surrounded by structures made of the likes Prisma had never seen before. It was safe to say the little Bonbon was absolutely in awe. Spreading her wings, she took flight and glided down to the village.