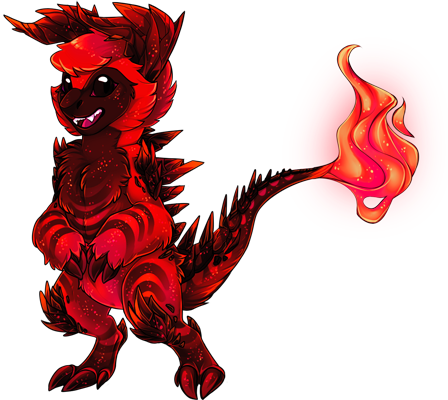 From deep within the volcanic mantle she formed, undergoing extreme pressures and heat most Ashfurns could not endure. She emerged from her egg and crawled up to the surface, tasting the smoky air for the first time. Among the ash and the polluted atmosphere, her fur can be seen sparkling like real gemstones. Her fire burns with great passion, and gives off a vibrant hum of light.

Ruby is a kind, gentle Ashfurn. Unlike most her hot-headed brethren, she holds out on instinctual offensiveness and would much rather befriend you. She is more often on the defensive side, protecting those of whom she loves and cherishes. She fends off most enemies and rival Ashfurns with her scorching tail fire and indestructible horns. She will always try to talk things out--though if all else fails, she will fight a good fight.

Ruby is also a very creative and artistic kind of girl. Her personal cave is beautifully decorated with jewels and weaves. Her personal favourite items to scavenge for her dwelling are soft and silky fabrics, which she uses to make small accessories. She has a large cave with a nest made entirely of soft fabrics, which lay in the middle of a large circle of handcrafted torches and candles.

What is most unique about Ruby are her polyamorous ways. Most Ashfurns stick to a single partner, though Ruby wishes to be around many female partners purely for love and support. She hasn't found any females to stay committed to her yet, and is actively looking for that kind of bond!

If you'd be interested in bonding your female Ashfurn with Ruby, feel free to inquire! This DOES include trans females.