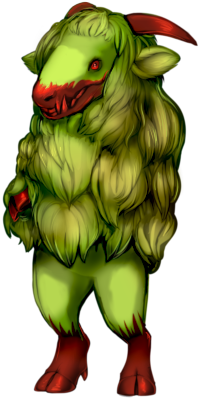 [a lil tw for mentions animal experimentation and death]

Saamaa is a result of animal experimentation, it is now thriving in the separated forests of greenland and becoming an intimidating prey to the local predators.

It was a part of an experiment on changing the natural color pigmentation, fur pattern and body shape of a bovine fetus so that it later develops into a gmo yak,

After saamaa's birth, the project was leaked to the media, creating a massive backlash against it.
Months later, the government ceased continuation on this experiment, accusations were filed against the scientists and their ethics, the founder of this experiment went missing a week before the protests and the animal that was a subject of these experiments was assumed to be killed.

Saamaa was able to survive in northern climate conditions, while it mostly feeds on grass, branches and fungi, it can also scavenge on carcasses if it wants to.
Usually predators stay away from it, due to how abnormal it looks, but if a desperate carnivore approaches it, it can either run away and hide or (as a last resort) can even have a face to face confrontation with it.

Saamaa cannot breed, due to its lack of sexual partners/desire to reproduce and its unknown number and state of its allosomes.

It has lost its front leg in the wild, It is solitary.