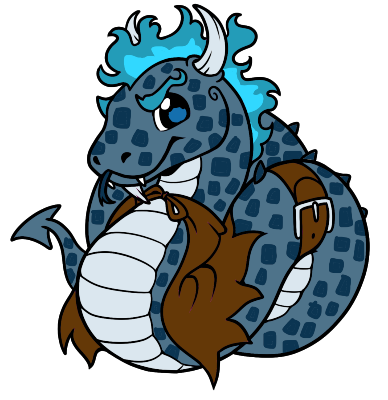 "It’s alright, please don’t be be scared, I mean you no harm. I only wish to help and heal others, even you."

Ninazu is a demon snake who was born to his demon father from another world and his gentle mother. Due to only one of his parents being a demon, Ninazu is only half-demon, though he inherited some of the powers his father had, and he can also take the form of a normal snake. When Ninazu was only a few months old, his demon father was destroyed by a wizard in an attempt to rid the "curse" he brought upon his village. Ninazu's mother, overtaken by anger and vengeance, killed the wizard, and ran away with her son. Ninazu lived for a few years with his mother in her home, and things were normal aside from him and his mother mourning his father’s death. However, the death of Ninazu’s father slowly drove his mother insane, and others were often suspicious and gave her odd looks as she passed by with her son due to Ninazu’s demon traits, which made his mother an outcast in her village. This, combined with her husband’s demise, caused her to become bitter and distrustful towards everyone, including her son, whom she thought was “defective”, and thought that killing him would make everyone accept her again. Now terrified of his mother, Ninazu ran away, where he spent the next few years wandering the land, helping injured animals and villagers along the way. One day, the demon snake met Cobalt in a small village in Olde Foxbury. The dragon was kind enough to let him stay in her house, unaware of the snake's tragic past, his hidden powers and true form... The demon snake’s mother’s location is currently unknown, though some say she may be looking for her missing son...

After Ninazu ran away from his mother, he devoted himself to become a herbalist and doctor, which he had dreamed for ever since he was young. He's a little more experienced at being a herbalist than a doctor, though, but he's still learning.

Ninazu is mainly male, but he's androgynous as well, and is a hermaphrodite. No one, nor Ninazu knows why or how this is. His stomach, like a real snake, can hold up to three times its weight, and his stomach acids are slow-acting, but very potent, and can dissolve even bone. Aside from Ninazu's natural snake instincts, he has fire constantly emanating from his spine to his tail, which is blisteringly hot. Despite this, Ninazu can actually control the temperature of the fire on his back, making it from blazing hot as the sun to comfortably warm that it can even be touched.

While Ninazu's appearance may be unnerving, he actually doesn't mean any harm and wishes to help and heal others, whether it be injuries or illnesses.