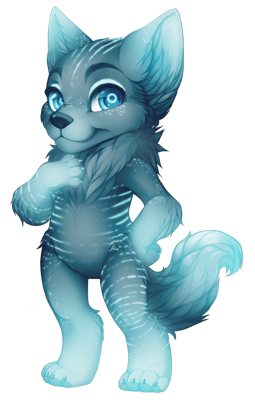 Tinge no longer has a house! They will be unable to work. Please replace the house or move Tinge into a FC slot.

A handsome dark blue wolf stares at you, his smile much warmer than the cool tones of his fur. His fur has an odd glow to it, with blue glowing stripes. His blue eyes match the rest of him, and sparkle with knowing. You almost feel like he's looking right through you, it sends shivers down your spine.

Tinge wasn't always a curious wolf, content with what life gave him. His dark brown fur and soft blue eyes were dull, he didn't have a care in the world. That is of course, until he had a near death experience. The creature was smart, cunning. It seemed to have all the knowledge in the world, and an oddly beautiful glowing pelt. He didn't seem to care though, not until he was lying in a puddle of blood. His life seemed to flash before him, and he realized he'd done little to nothing. Something sparked within him, curiosity. He captured the beast, and later in a failed experiment he was merged with it, giving him a knew unsettling knowledge and a glowing pelt. He may be crueler than he seems