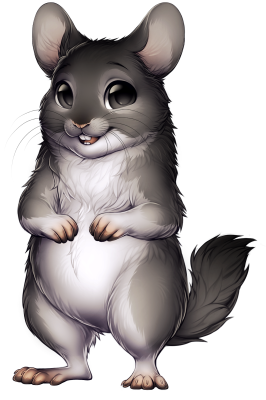 Rubber was created when Chinch realized all the other explorers in Chillville couldn't swim. Chinchillas aren't waterproof, especially when they are made of fabric. Thus, Rubber was made!

You'd think Rubber was named after the material most abundant in them, but really it's because of how they resemble and mimic the "rubber hose" cartoon style. This includes the monochrome coloration, Noodle limbs, idle bobbing and an unsettling gong-hoe attitude towards every task. A couple of other oddities that they seem to experience due to this strange connection to the old style animation is the love of whistling and censoring themselves while talking by replacing expletives with other words.