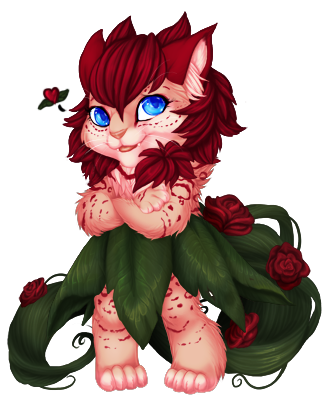 A gentle, kindhearted and shy soul, and a Member of the Felinus Flora Family, one would expect Lumaria to be primarily an Herbologist instead of an Explorer since his breed, being part plant and able to phase into them and encourage them to grow, has a natural green thumb. However instead the Flower Cat frequently spends more time either closed off in his Manor tinkering away at making clockwork robotic dolls that seem to be more living than machine in behavior or out in the woods and junk yards looking for the material needed to make them. Though with the horrors that live beyond the village, his ability to phase into plant life, as well as the fact he smells more like Roses than anything else, keeps this shy individual safe.

Oddly enough, his Leaf Kilt is all he wears when venturing out into the haunted woods surrounding Dragonsmaw Manor, since most woven materials will not phase with him into the local flora, making it so armor actually leaves him more vulnerable. Plus it's quite comfortable and doesn't tug at his fur. When going to town, he frequently wears regal looking robes that are easy to slip out of in an emergency that requires him to duck into some plant life to hide from or ambush an enemy.

Doesn't really have much interest in Pants,

Can switch his hair for Vines and Vines for hair -- He frequently uses the vines of his tail as additional limbs when working on his clockworks or venturing out into the woods, but he also has an exceptionally fluffy catlike tail as well.

And, more like one would expect, he does keep a small garden.