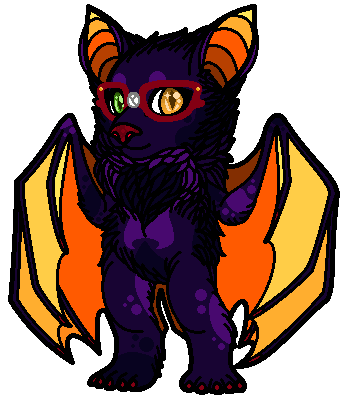 Jackie is infected with Lycanthropy. Changes into a beastly monster after exposure to moonlight or especially frustrating board games. Howling at the moon relieves the symptoms for a little while, but use a Golden Apple for best results.

~*Despite your better judgement and overall knowledge in horror movies, you decide to check out the noises coming from the attic. After going up the winding staircase from the foie, you spot the ladder that led up in a nearby hall...but it wasn't pulled down. You grab the cord and extend the ladder down to your feet, the sliding action knocking dust EVERYWHERE. You waved your hand in front of your face, trying not to go into a coughing fit as you started climbing up the worryingly shaky ladder. As you climbed up, the thunking and footsteps started getting louder and louder...so logically, you weren't going to go up there entirely until you found what was making the noises. So on your toes, you leaned forward, clinging to the attic's opening with only your eyes peaking over and scanning the area. Boxes and sheets were scattered everywhere, cluttering the space and having been coated with, of course, a thick layer of dust...but other than that, nothing seemed out of the ordinary. Upon further inspection, however, you noticed a trail of small paw prints looping around the sides of the attic's entrance...suddenly, you felt yourself practically jump out of your skin as a ghostly 'MMRRROOOWWW!!!' rang in your ears. Your hands flew up in terror, not realizing that the ladder started to crack and split under your trembling weight. As you struggled to climb down as quickly as you could, the ladder finally gave way. Eyes wide, you felt yourself plummet to the floor at an alarming rate. From there, everything seemed to go in slow motion...a blur of purple caught the corner of your eye, and suddenly you seemed to be back in the attic...and in someone's arms. Still shaking slightly, you glanced up, only to be met with big, round, amber and green eyes. You blinked...and they blinked. You raised an eyebrow, shaking your head as you got to your feet, attempting to gain your bearings and get a good look at this...thing...They stepped back, giving you a bit of space as they fidgeted with their oddly long, candy corn webbed fingers. After a moment, they cleared their throat, pushing their broken bridged, thick framed crimson glasses further up their muzzle as they spoke with a quiet, stuttering voice. "Y-You s-should be-be more ca-careful...get-getting up he-here..." They paused, their ears perking slightly as they started to stutter less. "I-I always f-fly up here...so I n-never use the l-ladder..." They paused again, their eyes darting everywhere as they struggled to find what to say next. Eventually, they managed to murmur out a proper greeting. "...M-My name's J-Jackie...J-Jackie...O. Lantern..."
A few more awkward minutes pass, and Jackie slowly started to shy towards a pile of boxes. "U-Um...i-if you want down, j-just let me k-know...I-I'm gonna...e-erm…" A few seconds pass, and Jackie quickly darted behind the boxes. You scratch the back of your head, a faint light behind the boxes catching your attention as you walked over to peak around the corner. An antique, black laced lamp faintly lit a warm blanket fort, littered with fluffy blankets, quilts and pillows. A laptop and drawing tablet sat in the corner next to a few bags and boxes of assorted snacks and chocolate candies, as well as an unmarked, open box filled with moon based trinkets and pictures taken at some sort of fancy gathering...In the other corner sat Jackie, slipped into a similarly fur colored onesie, wearing a crescent shaped mask from the open box and currently face first into a Switch. A Witchy suddenly brushed past your legs, prancing through the blankets and hopping into Jackie's lap. She shook herself, glancing and glaring your way before letting out a ghostly yowl. Jackie scratched the Witchy behind her ear before sliding the controllers from their sides, propping up the screen and holding out the blue controller. "Y-You want to p-play...? I-I just made it to L-Lavender Town with m-my Eevee...I-I just caught a Charamander a-as well...you can battle w-with him if you want..."*~

>!< As of October 21, 2019 >!<
~*As the wooden wheel whipped around and around with a hefty spin, Jackie held their webbed fingers tightly together, barely hanging off of their anticipation. This was their first time ever really bothering to participate in the Dragonsmaw's Harvest festivities, and already it seemed like so much fun! And everyone seemed so nice, too!...Normally, Jackie was one to think the opposite of people, especially around THIS time of year, but BOY, were they glad they were wrong on that part! And from the looks of it, this wheel seemed to be the only thing on the festival grounds that they haven't tried as of yet...so why not give it a shot? Everything else was pretty tame, aside from the cave...but that was for tough warriors, so it was MEANT to be mean looking! The manager of the wheel, a finely dressed lion by the name of Lucien, gave a wide, toothy grin as the wheel finally started to stop. "Round and round the wheel spins...Let's hope Lady Luck is on your side! You could win so many prizes here!" The small bat couldn't help but grin from ear to ear as they eyed several slots on the wheel pass by the spinner, some with tickets on them, some with candy...finally, the wheel came to a slow halt, stopping on a small space with...claw marks? Jackie looked up at Lucien, an eyebrow cocked. A look of worry seemed to pass the lion's face, but he quickly shook it off. "Ah!...*THAT*...slot...I-I'm sorry, but it seems like you don't get anything...better luck next time!" Jackie gave a puzzled look before slowly walking off, scratching their head as they decided to go wander off until they could try everything again...
As they walked along the dense clearings of the nearby forest, the small bat jumped slightly as a bright light suddenly blinded them...The clouds parted, and a radiant beam of moonlight bathed them from above. All at once, they started feeling themselves change; their fur standing on end as it became rugged and unkempt, growing in length and fading in color before being taken over by a dark, misty black coat. Their snout cracked and shifted as they felt their teeth push and grind within their mouth, eventually producing elongated fangs that were practically dripping with thin, watery saliva. Their small webbed fingers felt numb for a moment, before sharp nails sprouted from them, leaving claws capable of shredding flesh from bone. All the while, the small bat could only manage desperate whimpers as they struggled to keep the deep growling from within their throat from escaping, holding onto their muzzle with their monstrous fingers with more and more force...tears streamed down their cheeks as they eventually tumbled to the ground, the force from their grip making them grow lightheaded...Everything was going fuzzy, fading as Jackie could feel their self control slowly slip away from them...from there, everything was a blur. Different places, people, they all seemed to go as fast as they came...but this Halloween seemed like one that was sure to be unforgettable...*~
>!< Any interactions during October are made with Jackie's new form! Their corresponding Paintie will be finished eventually, and when it is, it'll be their appearance for all Octobers from here on! But until then...use your imagination. XDDDD >!<