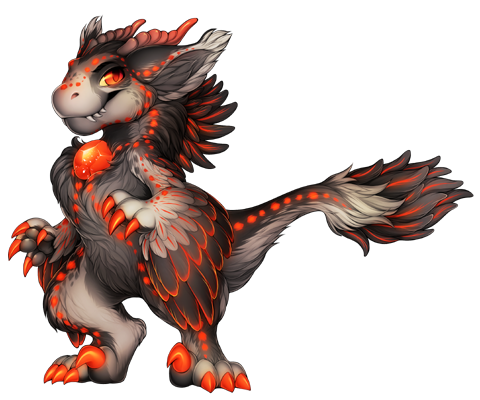 You knock on the door.

"Come in," A irritated voice sounded out from behind the door of a rather run-down shack.

You enter the shack. It was very cluttered. In the middle sat a wide, old, dented and rotting mahogany wood desk, with several blueprints spread out on it, and toolboxes awry. Hung up on the walls were several construction tools like hammers, saws and more toolboxes. The floor was covered with fluffy rugs lining every inch of it. In the middle, sitting behind the desk on an equally old chair was a grey scaled Gem Raptor with a bright, pulsing orange gem set in the middle of his chest, with markings over his body in the same color.

"I see you're new here," the raptor spoke in a rather gruff voice, not looking up from a blueprint he was examining rather closely. "I'm Lucifer, the resident Head of Construction, and responsible for about half the houses here in this part of Quetzal Palace. But of course, who could surpass me?" He said haughtily, puffing out his chest. "They say I need to work on my confidence. Said I needed to trim it down, my arrogance getting out of paw."

He let out a laugh that sounded much like a bark.

"Of course I could trim down my pride! But that wouldn't make me half as charming," he said confidently. "They also say I'm a rebel. Maybe a bit too rebellious. That's rich, coming from a whole rotten lot of residents that'll burn my shack down if I close my doors and take a break for even one minute." He scoffed, and finally looked up at you. His eyes were a startling red.

"Enough about me," Lucifer growled. "State your business now. Don't waste my time or yours."