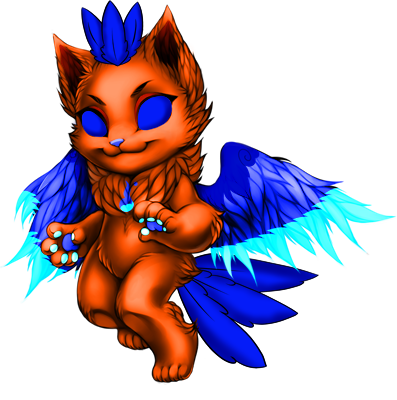 Kalayo is a 3,806 year old cat/phoenix hybrid ancient egyptian demigod. His wings, tail feathers, and head feathers are made of fire, however he’s very careful with them. His internal body temperature is nearly 200 degrees fahrenheit. His blood, flesh and tears are blue and steaming hot.
Kalayo’s birth was a first in the world of Ancient Egypt. He was the illegitimate child of Bastet and a phoenix named Floga. Floga had been kicked out of his phoenix community back in Greece, and Bastet found him wandering around in Egypt and offered him a place to stay. Eventually, he went back to Greece, completely unaware that Bastet was pregnant.
Kalayo lived his first 2 weeks believing that Ra would kill him because of his illegitimacy. Floga came back 2 weeks after Kalayo’s birth, and was shocked. Scared that Ra would punish them both, Floga recommended that they abandon the baby. Bastet, being a symbol of motherhood, refused and wanted to raise the child despite consequences. The two argued about it for a while before Kalayo got sick of it and flew away. As he didn’t have a name yet, he named himself Kalayo.
Kalayo decided he wanted to adventure the world. He also began to write a lot, and is rather skilled at it. Since then, he’s seen and written about almost everything. He’s not very serious when it doesn’t require it, and likes to joke around. He genuinely considers himself a normie. He talks to Ra sometimes, they’re cool. He claims he’s Autochorissexual Heteromantic, however he secretly obsesses over another man. Nobody really knows why, or even just knows, but he acts slightly awkward around this dude.