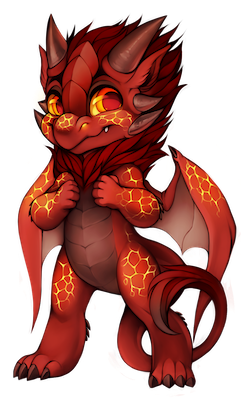 KAIJEN 0074 is infected with Lycanthropy. Changes into a beastly monster after exposure to moonlight or especially frustrating board games. Howling at the moon relieves the symptoms for a little while, but use a Golden Apple for best results. The roar of flames, the spark of Red, and a fearsome dragon of fire and madness answers the call to battle. The Catalan dragon shifter, Tah-Razu, fears not man or beast. Bursting with the color charge of Red, those that stand before her will be consumed by the flame.

A roar in the twilight, a clouding of breath, and suddenly you're challenged by a bizarre creation of death and terror. Three red eyes stare at you with an apathetic death, and another roar explodes from its ridged mouth with terrifying intensity.
Two jagged horns adorns its lank head, which itself is scarred all over. Oozing magma escapes the creature's twisting nostrils set within a drooping nose.
Its lank head sits atop a lofty, fibrous body. Runes or emblems, each glowing brightly, cover parts of its torso, suggesting this being's definitely not alone.
The creature steps closer to you, its four legs calmly carry its draconic body with a chaotic energy. A muscular tail swirls behind it, each movement scrapes the floor beneath it.
Two immense wings extend themselves fully. Scythe-like bones, and feathers of fire stretch upward before coming down again with force. The creature comes closer and closer, its eyes never leaving yours.

I come from Catala-4(TMME-4). I think... I lived in the slave 'ouse in the city... Gau Wauggakn. I don't recall. (hm) Things were... relatively normal there until a gang of sorts attacked. I think they were called Three Eyes or something like that. Ask Whisper. The survivors were... rounded up and taken to Na'Yauzen, on Zaria-3(TLQY-3). I met 'er there. Whisper.

She was the peculiar sort. They forced us into a... cruel experiment. She killed 'erself the day before. I could not. They... restrained me and forced a beast of... great strength to... connect to me. Quasiggnoth. The 'idden One. The Grand Master... of the... Shadows. There was nothing left to do... but snap. It was... so easy to break free in... Dragon form.

We... snuck aboard a cargo ship... and fled to Earth. It was a long journey, but we made it. I met a strange... three 'eaded beast, who led us to another 'uman... called X. We traveled with X, the... bat shifter, for a little while, before an even stranger... beast appeared, fought us off, and fled with X. It spoke in a... strange language and was... accompanied by two semi-robot... things.

Not so long after, it... confronted us again. Why? I... simply went along, 'aving... witnessed its strange powers. It looked like a... butterfly, but pink and... covered in feathers. It... horribly attempted to speak the language... they called Basic. The red and yellow... semi-robot had to... translate. "Our General wants to... recruit you and your... accomplice into an... experimental brigade. Meet us at the port at 22:30." So I did. Whisper told me to. She said it would give us a future. A way out. Rather than... dying on the streets.

I am the fire... to 'er ice, the light to... 'er shadow. I 'ave served to guide, but also to... mislead. You can call me Tarzu, Cherry, Spear, or Cheer. Soaring high, like the Tzes, raining... dragon's fire along the way. They see the way my own head... shakes and... twists, trying to shake off 'Is words. Unsuccessful. His words are... eternal. They will survive past... endless eons. And with strange eons, even life... and death... may die. Where I will be, I do not know.

Still twitching and shivering despite the warmth, the great draconic beast effortlessly breaks free of it's restraints. You stand there, suddenly paralyzed by the creature's gaze. What once was human has turned into a beast. It roars and lashes out at you. in a split instant, everything fades to black.

You wake up at a hospital. It was a miracle she let you live. Most who have seen her have not been so lucky.