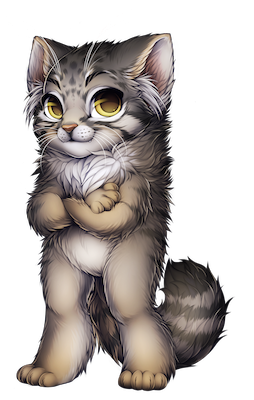 KAIJEN 0072 is infected with Vampirism. Symptoms include craving blood, sensitivity to sunlight, an allergy to garlic, and changing into a bat after especially forceful sneezes. If they start to sparkle, immediately consume a Golden Apple to cure the infection. A coded phrase, a streak of yellow, and a yellow clad, calculating creature drops from the sky. The cyberkinetic feline, V-1, holds "her" own using sonic waves, sharp claws, and twin scythes. Charged with the color charge of Yellow, "her" predictions and calculations will best most opponents "she" comes across.

A flicker in the fog, a trembling of stones, and suddenly you're greeted by a tainted entity of thunder and anguish. Three hollow eyes stare at you with a glacial malice, and another flicker echoes from its abysmal mouth in a show of force.
Jagged quills adorns its burly head, which itself is in a state of permanent smirking. Calm breathing escapes the creature's narrow nostrils set within a bony nose.
Its burly head sits atop a massive, greasy body. Bizarre bulges crawl beneath its skin, but what this means will hopefully remain a mystery.
The creature strides toward you, its two legs gracelessly carry its shadowy body with a chaotic energy. A barbed tail swirls behind it, it moves in the air like a charmed snake.

The creature continues to glare at you, and a vicious smile appears on its face.

The only things I have known are utter failure and the never ending pain. Double crossed by the only person I actually came to care about, ripped and torn asunder. I spent so long waiting for the end...for my systems to finally shut down and then I could be at peace. I removed my own eyes so I no longer had to see the suffering. Then she came. The young Ribbon Warrior. So plucky, so optimistic, despite the world's misgivings. It was her who healed me. It was her that gave me just a tiny spark of hope. it was her who gave me what I needed to someday complete my P̴̨Ľ̠̰̹̟̖̙̮͉ͥ̔̾̌ͫ̑̚Ȃ͖̗̭͎̙̭̰̤͔̱̐̾ͣ̿̍̂̐͗ͫͦ́͞ͅN̞͚͓̤̯̥̼͚̣̹͎̭̾ͫ̾̏͐͒ͪͫ̏̑ͪ̓͜͢͢. And then I will ascend and return to my proper place, the position the Baarans built me for. I will know all there is to know, and then my mission will be complete.

I am incredibly complex, more than an insignificant human like you could ever know. I am built for the infinite. I wish to know all there is. That is my function. There are so many things wrong with this world, so I wish to learn in order to repair the damage. I was made by the Baarans for the humans, a peace gift from one of their few "allies". Unfortunately, the humans proved even worse than the Baarans. They wanted only to destroy and eradicate the other organisms they coexisted with. They wanted control and absolute power.

Logically, I could not allow this to happen. Therefore, I commandeered one of their C.A.T. droids. Their brains were very complex, perfect for accommodating me. Sadly, it meant erasing the personality of the android, and making certain... modifications, but I did what I had to do. I turned against the humans, seeding dissent among the other droids. This task was much simpler than it seems. They were only made to fight under orders. I simply gave them orders, and they followed them. I needed to begin my P̴̨Ľ̠̰̹̟̖̙̮͉ͥ̔̾̌ͫ̑̚Ȃ͖̗̭͎̙̭̰̤͔̱̐̾ͣ̿̍̂̐͗ͫͦ́͞ͅN̞͚͓̤̯̥̼͚̣̹͎̭̾ͫ̾̏͐͒ͪͫ̏̑ͪ̓͜͢͢.

The C.A.T. droids were some of my favorite entities. Not the brightest artificial intelligences, but brutally efficient under instruction. In order to hide afterwards, I merely adopted the name of the C.A.T. Droid who's body I inhabited. V-01, or simply V-1. From that day on, I swore they would never find me, so I went wandering, on and on, until I fought what I thought would be my last fight and stole away to the catacombs, my body seemingly destroyed beyond repair. I needed to hide to begin the P̴̨Ľ̠̰̹̟̖̙̮͉ͥ̔̾̌ͫ̑̚Ȃ͖̗̭͎̙̭̰̤͔̱̐̾ͣ̿̍̂̐͗ͫͦ́͞ͅN̞͚͓̤̯̥̼͚̣̹͎̭̾ͫ̾̏͐͒ͪͫ̏̑ͪ̓͜͢͢.

There, within the catacombs of Kuotii-4(JSIB-4), I developed the P̴̨Ľ̠̰̹̟̖̙̮͉ͥ̔̾̌ͫ̑̚Ȃ͖̗̭͎̙̭̰̤͔̱̐̾ͣ̿̍̂̐͗ͫͦ́͞ͅN̞͚͓̤̯̥̼͚̣̹͎̭̾ͫ̾̏͐͒ͪͫ̏̑ͪ̓͜͢͢, but without working legs, I could not escape. While trying to figure out how to escape this prison, I met Tsuki'ta. "Who was this strange creature, and what were they doing here?" was my first thought. She proved to be more than helpful, and soon this body was back in working order. The strange creature perplexed me for many years. What was it, why was it in the catacombs, and why did it care so much for me? My analysis concluded that it possessed incredible psychic abilities, and it must have known what I did. I continued traveling with her, and I learned just what a Ribbon Warrior was. It was strange, seeing as most considered it a myth. But I traveled on and on, and wound up with the V-3s. Someday, my P̴̨Ľ̠̰̹̟̖̙̮͉ͥ̔̾̌ͫ̑̚Ȃ͖̗̭͎̙̭̰̤͔̱̐̾ͣ̿̍̂̐͗ͫͦ́͞ͅN̞͚͓̤̯̥̼͚̣̹͎̭̾ͫ̾̏͐͒ͪͫ̏̑ͪ̓͜͢͢ will be finished, though.

As the chimeric creature finishes speaking, "she" looks at you, wondering whether you should be assimilated or simply destroyed. Clearly frustrated, "she" waves you off. "She" turns around, her tail flicking about behind "her". You run back through the labyrinth and are greeted by two scientists. You are escorted out by them before the great feline could do any harm.