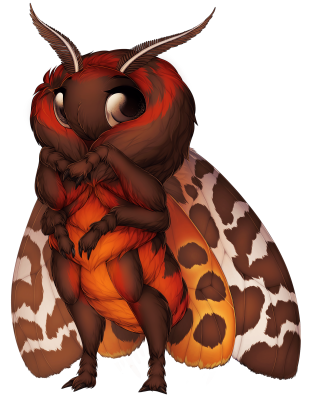 KAIJEN 0075 is infected with Vampirism. Symptoms include craving blood, sensitivity to sunlight, an allergy to garlic, and changing into a bat after especially forceful sneezes. If they start to sparkle, immediately consume a Golden Apple to cure the infection. A rumble of acid, a roar of smoke, and a fearsome Ascended Rakshazzak Infernal Demon solidifies before you. The demon, Kangradoth, roars once more, revealing his sheer strength. Burning with the color charge of Black, crossing him may very well result in your death by the burning smoke.

A screech in the twilight, a spark of light, and suddenly you're blocked by a bulky figure of sin and grime. Five red eyes stare at you with a disturbing obsession, and another screech surges from its concave mouth as it stares you down.
Rows upon rows of quills adorns its thick head, which itself is covered in glowing tattoos. A puff of smoke escapes the creature's tilted nostrils set within a sinewy nose.
Its lank head sits atop a vast, muscular body. Dark, smoking symbols cover its chest, perhaps a remnant of even stranger times.
The creature rushes forward, its four legs gracelessly carry its glowing body with a calm energy.

Two gigantic wings extend themselves fully. Glowing bones, and feathers of shadow stretch upward before curling up. Its eyes are still affixed on yours, you can feel their intensity grow with every passing minute.

I had done nothing wrong. Dark is not arways evil, nor is light arways good. My kind was trapped in a brutal war when I was only 3 years old. I was captured when I was 50, and nowr I am 197 and finally free. I must thank Eae for having syach a kind heart, nothing like her ferroyr Evangelions. I did nothing but control the smoke and poison. She gave me pride. She gave me back the caurage I lost.

My story starts within the Seventh Infernal Palace, where the Karrthratt royal family ruled over the realm of Violence. I was their second born child, but the first male of the family. My older sister, Zarrathrat, had a demeanor fit for a queen, and was being primed to take over from the current queen, Xanadi. I was mostly left to my own devices, so I would visit the tortured souls of the three rings. The suicides fascinated me most, but the ones here were only of guns and knives. All others, such as the hangings and the drowned, along with those destroyed by another's hand, departed to the Null, guarded by the Dragon of the same name. There was not a lot I could do as a Demon Prince.

When I came of age, I underwent a special ceremony to assume a more powerful form. I went from a shadowy 1 foot tall moth to a seven foot tall Rakshazzak Moth/ Gyugen Infernal Bear hybrid. I was still considered a Rakshazzak. It was a 75/25 split. Just saying.

Eventually, war broke out between the Planes of Hell and the Planes of Heaven. In a bold move, a team of about 7 Seraph Angels succeeded in capturing me, though I was only an Oppressor at the time. They carted me off to Moonfeather Prison, to hold me for ransom in order to gain leverage over the Demons. They chose wrong, however, as the true heir lay hidden for many years. I was imprisoned there, slowly gathering energy.

Eventually, Derih, the Evangelion in charge of me, was called away to battle. Eae, another Evangelion, came to replace him. She was kind to me, and the two of us grew close after many years. Who would have ever thought that an Evangelion Angel and an Infernal Demon would have become friends? I eventually suggested to her that we try to escape. She agreed, much to my surprise.

I escaped with Eae and traveled to Earth. The Third World was such a strange place, with all kinds of beings I had never seen before. She guided me and I learned their names. Reffus, Exo, Catalan, Kaian, Zarian, Xarradou, Venomshire, and many more. I especially liked the Venomshire. They reminded me of the Demons who I was forced to abandon. I am here now, fighting for a cause I never knew existed. I am here now, and I continue to fight. No longer for my own rewards, but to protect.