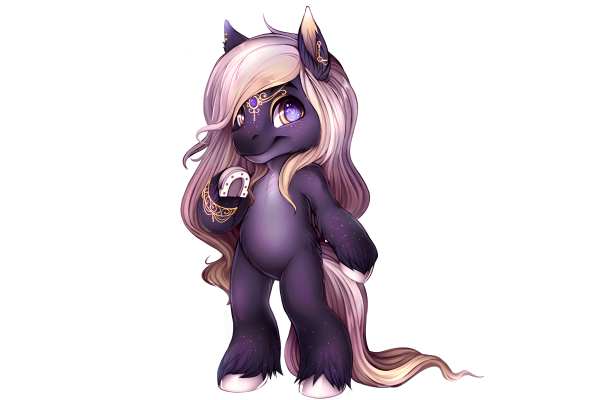 Ryne no longer has a house! They will be unable to work. Please replace the house or move Ryne into a FC slot.

This equine is of noble bloodline (though Nadine insists he's a royal snob). He's a newer addition to Momo's village, and doesn't have many skills, but the nicer villagers have been taking him under their wing, and teaching him new things. He may have grown up as a pampered prince, but that doesn't mean he isn't eager to be useful, and learn. Currently, besides helping Crème out with gathering resources for the village, Ayame has been helping him master the seeds of Oceandome. After that, he plans to master other seeds, and work with Nyx to master potion crafting.

He grew up in Quetzal Palace, near the border of Olde Foxbury, where the clouds begin to descend to the land, so he has cultural influence from both towns. The blonde stallion lived a pampered life, with everything at his hoof tips. Remnants of his luxurious lifestyle is still evident even years later, and living pretty roughly for most of them. As a young foal, about to reach stallionhood, his family's estate was pillaged, and ransacked by bandits from the Olde Foxbury Forest. The keep was burnt down, and his parents were killed, along with all their wealth, and his inheritance.

He managed to escape, suffering only minor burns, which healed over time, and left no scarring. Only thing he had was the circlet, and other jewelry he still wears now. He was lucky not to have been mugged for those things. He traveled through Olde Foxbury, living off of the streets, and begging for food. That went on for about a year, and he nearly died multiple times. When he fell down with illness, a kind saggitari -who will remain mysterious for now,- took him in, and nursed him back to health. He taught Ryne very useful survival skills. He taught him basic sword combat, which Ryne flunked. So he taught him how to use a bow, which ended up being his forte. The saggitari showed the young stallion how to discern edible plants in the woods. The taur showed him many other survival skills, and then Ryne went on his way, feeling as though he were a burden. He misses that saggitari, and sometimes goes to send a letter via flishy, but never knows what to say.

Nadine frequently insults the poor stallion, who feels like she hates him. He tries to work hard, to gain her approval. However it rarely works. Luckily most of the other villagers are nice, if not a little odd. He gets along most, with Ayame, and Nyx,the two most friendly villagers.