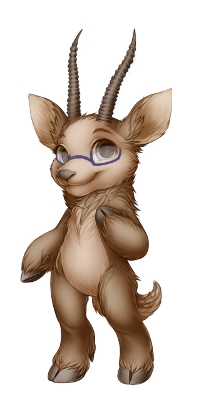 Ok so I finally made my first paintie for Serious and I'm so excited ahhh!! <3

Part antelope, part deer. She more heavily relates to the deer side of her though. Serious wears glasses because she's blind as a bat, and her favorite accessory is a scarf around her neck, but she's been seen in sweatshirts, sweaters, sweatpants, and other comfortable clothes before. She refuses to wear jeans though, so don't suggest that.

Serious is, quite frankly, a huge nerd. She spends most of her days playing video games, drawing endlessly, delving into her fantasies, or finding something she deems interesting (probably involving animals in some way). She's a dreamer at heart, maybe more literally than figuratively.

Serious has difficulty making friends, or keeping friends for that matter. She appreciates every friend that deals with her annoying self and tolerates her presence. She likes to make her friends happy with whatever resources she has. However, her friends do need to hold her up sometimes since Serious has some emotional problems (as all teenagers do). It all works out though.

Serious decided to travel to Tigereye Peak when she finally took the first step to combat her anxiety and do something for herself for once. She found an old, abandoned, and small house a little ways past the center of town. It's not very clean or home-like yet, but she has hope that it'll be worth putting her time into. She is a little lonely living by herself, but the people around town seem nice. It's only a matter of gathering up enough courage to talk to them.