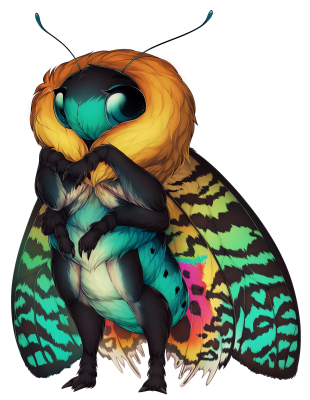 KAIJEN 0077 is infected with Vampirism. Symptoms include craving blood, sensitivity to sunlight, an allergy to garlic, and changing into a bat after especially forceful sneezes. If they start to sparkle, immediately consume a Golden Apple to cure the infection. A burst of wind, a flurry of feathers, and the disciple Ribbon Warrior, Tsuki'ta, drops down from the sky. A cunning learner of traps and unconventional techniques, this pint sized powerhouse can hold her ground. Emanating the Color Charge of Orange, this clever creature can confound friends as well as foes.

A shrill in the smoke, a buzz of a drill, and suddenly you're confronted with a small creature of sand and dust. Six clouded eyes stare at you with a reserved intensity, and another shrill rushes from its concave mouth as if a warning or challenge to you.
A single horn adorns its bowed head, which itself is otherwise surprisingly smooth. A constant plume of sand escapes the creature's serpentine nostrils set within a meager nose.
Its narrow head sits atop a long, stringy body. Otherworldly color covers every inch of it, probably remnants of an encounter with a different, horrifying being.
The creature moves forward slowly, its four legs clumsily carry its diabolical body with a furious energy. A whip-like tail swirls behind it, tendril-like veins protrude from it in several places.

Two meager wings extend themselves fully. Cracked bones, and feathers like daggers stretch upward, and side by side. The creature's eyes never once stopped watching your every move.

I was born on Gelia, but upon the great event that it joined the Empire, our lineage, the Kakaru, decided to move to the Empire occupied planet of TGWU-6. This planet was not far from ours, and it was there that I met Melissa. She was a Minatian wolf.

We quickly became friends. I lived life normally for a while, before one of the final wars broke out in the TG sector of border planets. I shifted into the form of a crow, trying to warn those units but only bringing death. Being only a disciple with almost no training, I couldn't fight. They called me the Warning. Despite my speed, I wound up only leading Yin'Tzes to the souls, like a real crow. Those Yin'Tzes were clever creatures. There was nothing that I, only a disciple, could do. Trying to ward off a Tremor, I sadly lost my right hand, and had to have it replaced with a thin, sturdy, spike.

Melissa was horrifically slain in this war, yet I wound up trapped within her body, transported into the Catacombs. Stuck living within the rotting carcass of my best friend, I was unable to break free or even call for help. I never even knew such a thing was possible. It took two years, but I was free. Once more an orange three legged crow with a spike for a hand, I took off racing through the Catacombs. I know that sounds weird, but bear with me. The spike could not shift with the rest of me.

The Catacombs were like the world's largest maze. It felt like I would never escape! Trails of blood were splattered on certain paths. The metallic smell was unmistakable. I kept moving, but this place felt like one of those strange mazes I'd been told about by a strange man. Regardless of the moves I made, I wound up only coming closer to the center. The center was even weirder than anything else I'd ever seen! There were strange shadows everywhere and...disturbing figures stood around this pulsing red orb! I had never feared for my life before that moment, but now I can no longer say I have never been afraid. One of them looked and saw me. I was frozen like when the Earth people say "like a deer in headlights". All I heard was a grinding sound as the figure approached me. It's body was covered in shadow, and the only features I could even make out were a horse like skull and these long, oversized claws. I'm pretty sure it had a mouth inside its mouth. Surprisingly, it was really quite polite. It called itself a Scavenger, a denizen of these strange places called Catacombs.

I was then struck from behind, and when I awoke, I'd been forcefully shifted into my crow form. It now resembled the Scavengers themselves. It's head wasn't anything more than a skull, and its body was also covered in shadow. I lived among them for a while, now able to navigate this strange place. I became familiar with death, seeing all of the new dead that arrived here. Eventually, I started trying to figure out how to get out of this place.

Then I stumbled across V-1. Initially, I mistook her for another one of the dead, but when she jolted awake in front of me, I couldn't help but to investigate. I shifted back into my Ribbon Warrior form and crept closer, ready to fight if need be. The beast, whatever it was, only had one eye, solid red and glowing in the murky darkness. It's body looked mangled and thin and that mouth... For such a human face, it's mouth looked extraordinarily catlike. It hung open as if it's jaw didn't work. And when the thing actually managed to shut its mouth, I shuddered in the shadows. The clanging noise it made sounded... final, like your fate was sealed by its jaws. Its claws were deformed, one being shorter and straighter and the other being longer and more curved. It still had its tail, this bristly thing that looked like it should've been part of a weapon. I lived among eldritch beings, and that still frightened me.

Using my abilities, I learned who she was, what she did, and why she was here. I knew more about her in a second than she knew about me in the 2 years we traveled together. V-1 was a bizarre figure, but it was clear as would need to cooperate in order to escape. Ultimately, our efforts were successful, and we escaped and stowed away on a cargo shuttle bound for Earth. Upon landing, we were able to repair V-1's legs, enhancing her into a chimeric human/cat mixture. I also gave her a nice grin so she could smile again. She had always seemed so down ever since we met.

We were able to get on a passenger shuttle bound for New York, a truly lovely city once the new measures were put in place. Sneaking around was easy, because this planet also used Catacombs. There were even Scavengers here, too! From New York, we headed West and made our way to Kansas, an agricultural district. It was here we ran into Sanyitirze. It was interesting seeing a Dutch Angel Dragon in the flesh, rather than a carcass they left behind. He was accompanied by a young lady who called herself Nyppha. Apparently the name meant "beautiful" in her native language. There was just something...not right about Nyppha. She looked like she could murder someone if they got on her nerves. Sanyi just looked scared whenever she was around. I felt bad for the guy. But...there was this interesting couple I met. Straight pair, a tabby and German Shepherd. That tabby was the most airheaded person I'd ever met. Oh goodness... she got what she deserved. Enough about them now. Although, Xinhua's been pretty great to have around once I got that idiot out of the way.

From here, we traveled throughout the Northwest, eventually meeting Hakariyu'ki. Although he bested both of us in combat, he was impressed with our skill and power. Eventually, I became V3-7, and the Orange Kaijen. (yet I'm still the smallest one)