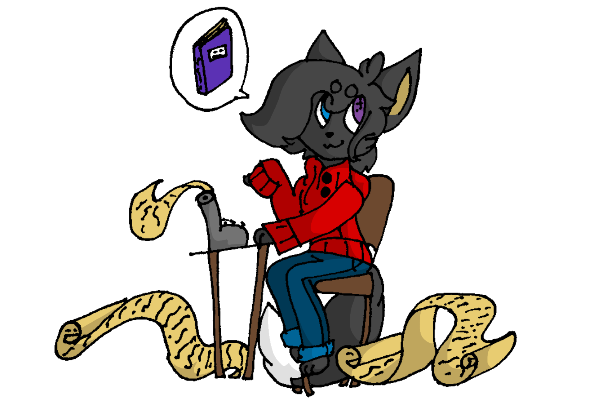 Anna is the classic best Russian spy friend (yes, she has the accent)! She spends her time with Honey or Aranova, and enjoys drawing, cooking, and exploring! When Wykin is in need of art to do be done, Anna is her go-to!

Anna is a silver Eurasian Kitsune, but she tends to keep a simpler, less alarming form- the common fox. She's quite fond of it, and rarely uses her true form.

Together with Honey, they are nicknamed "Stalin and Hitler"

Anna helped him settle back down, and became good friends in the process. They live together in the north. The two don't really interact much with Sallentine, although they're urban legends there. (Wykin's been doing crossovers, oof. She introduced their story in book form to the people of Sallentine. It quickly became a treasured classic literature.)

Anna is very skilled and experienced with magic- don't tick her off or you may find your precious belongings go up in flames spontaneously. Or you may find yourself being sent flying across the room into a wall. (No, she is not a Mary Sue. She's been practicing magic all her life, taught by her missing father, who used to be a magic user by profession. She's not op, sunlight wears her out fast and she needs moonlight or starlight to gather the proper energy to use her magic)

MOST LIKELY TO LOOSE A FIST FIGHT WITH A TODDLER. YEET!

Pretty forgetful. She doesn't even know how or what to say half the time, being a bit scatterbrained. (Literally got caught messing up the phrase "cruising for a bruising" by saying "bruising for a cruising")

Hardcore grammar nazi for life. Prepare yourself if you make no effort to be grammatically correct, because she will slam you for it.

Like Wykin, she will not hesitate to crack you upside the head with a stop sign if you need to straighten up and fly right.

"Why can't people be like potatoes? If we were all potatoes, there'd be no war or famine or sadness because we'd be... Well... Potatoes!"

"Hey! Who said you were going to die?! Nobody's gonna die! Not on my watch!!"

Personality: An INFP who's low-key psychopathic, but endearing at the same time. (Art by the amazing HappyBuddy , btw)

DON'T CHU DARE LEAVE THIS PROFILE WITHOUT LISTENING TO THIS!!