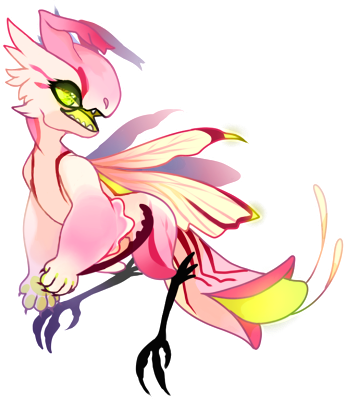 Erya - The Blooming Huntress of Kaqzarah

The lush planet Kaqzarah, teeming with thriving jungles and life, is not unlike other worlds filled with wondrous creatures and fantastic sorcery...
unless you count the fact that it is mainly inhabited by arthropods. Large intelligent insects and arachnids make up the dominant population. Intricate apis hive structures line the grand trees, immense ant and mantis colonies are hidden under the ground, broods of spiders prefer to stick to the darker caves where they make their homes. Although most species are very territorial, aggressive to outsiders and follow a code innate to them, they readily exchange services and goods with each others, creating alliances. Spiders sell the excess webs they weave, implementing them into armor to create stronger defenses. Scorpids dabble in poison and drugs making them excellent doctors, bees trade their delicious honey, mantids hunt and trade the meat and materials they bring down and ants rear beetles for both work and food purposes among other things. Kaqzarah is not a paradise for mammals or avians, but it is the perfect planet for insects to inhabit.

Erya hatched from her matteregg inside a mantis colony called Kaqzuri. The queen decided to keep her and let her be taught like any other nymph. Erya got her name from the fact that her first noise was "errr-yaah!"
She grew up steadily, taking her sweet time molting her wings and maturing in comparison to her peers that grew up fast. However, Erya showed early that she possessed a special kind of wit and rationality that both made her life harder and easier. She became quite popular and after finishing her initial teachings, she started to educate nymphs herself. Her rationality is something that her peers struggle to understand. As she is not a fully-fledged mantis, she doesn't understand why a female mantis is allowed to eat a male one if she wants to. The vicious nature of mantises confuse her and while she tries to emulate it, she doesn't quite have the heart to.
However, she can understand every spoken language she has heard naturally. When she is not teaching nymphs, she spends her time as a representant of the Kaqzuri, conveying her queen's words to allies and enemies alike.
Her cunning is not to be underestimated and her fighting abilities are fierce and dangerous. Erya does not hesitate to unsheath her claws should someone threaten her. Even so, she's generally a very friendly and curious female. She is clueless about her own species Nebular Nomads and will not discover them until the Gathering. Nebular Nomads! belong to the fantastic Thalliumfire! They are a closed species, so you cannot make your own.
Masterlist entry for Erya
Amazing paintie art done by Tokamir!
CSS template by Cro/Mauve