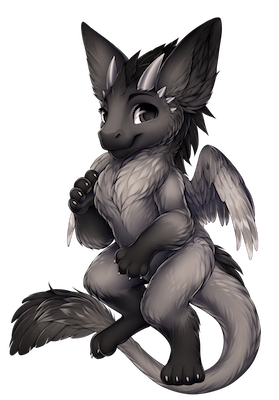 Sanyitirze is infected with Lycanthropy. Changes into a beastly monster after exposure to moonlight or especially frustrating board games. Howling at the moon relieves the symptoms for a little while, but use a Golden Apple for best results.

My full name is Sanyitirze Ushmaei, a Dranffun tribal name meaning "Hoofed Beast Cantering Through River". I was born a Dutch Angel Dragon on the planet of Dranffu-5 (AIFB-5), a "wild planet" within the NeoGen Empire. I knew fantastic creatures possessing, among many things, three heads, many limbs, along with unique powers. I discovered my talent as a hydrokinetic, a skill I likely get from Narazu Ushmaei, one of my parents.

Eventually, I grew up and started work as a warrior, protecting the "R-Types" from the "M-Types". While battling a particularly ferocious M-Type Gawwdyt, I was knocked out in a massive storm. When I came to my senses, I was greeted by a strange entity. It called itself Piscus, and I figured it was an R-Type. It resembled a moth, but with two scaled whale tails and ram horns.

I learned that Piscus was a Hydroptera who worked with a few races of beings collectively referred to as Emissaries of the Drowned. They were mythical hydrokinetic creatures said to be able to revive and command undead beasts connected to water. I trained alongside them and learned their powers.

After many years of serving as a mage among their ranks, I decided it was time to return to the surface. Another mysterious storm appeared, and then, I simply died. It all faded to black in the swirling storm. However, I remember seeing many bright lights, all swirling around me and other strange, ethereal creatures of all shapes and sizes.I

Due to the nature of my species, I was able to reincarnate and retain my powers. However, the process went wrong, and a mysterious creature was bound to me. Only I could see him, as it could only appear as a weak astral projection. on the flight to Earth, I met a lovely Palomino horse returning from Rjalja -7, after a long trip to study the ecosystem of that Wild Planet. We struck up a conversation, and in the years that followed, we built a happy relationship. She understood that I couldn't have children, which was nice for once. Unfortunately, it would have appeared that she was being targeted by someone, and got plugged in the head. I was completely devastated. Just... How... How does she just murder people so easily?!

Anyways... I seemed to have picked up a bit of a... Yandere... as a Japanese kitsune once said to me. Nyppha and I are complete opposites. Her emotions rule her, control her, driving her to do dangerous things. Unlike most of my kind, I'm rather detached from things. You can't really blame me though, considering the things I've had to put up with.

Wandering along, trying to separate myself from that eldritch canine creature, I stumbled across Tsuki'ta and V-1, fighting with two bizarre creatures. I had never seen the likes of them before, that I knew. I recognized the creatures as Catalian Maned Tigers, and one of them was a pretty powerful terrakinetic. They were warriors from the C-37 Brigade, as evidenced by that logo being displayed on the sleek uniforms they wore.

Not long after, I met the members of the V-3 Brigade and became the eighth member of the experimental group. I am no longer a true Dutch Angel Dragon. I now exist as an eldritch mockery, a fifth dimensional beast who merely appears as one. Over my centuries of life, I grew in power and intelligence until I was no longer fit for the species. And yet, I am not the only one of my kind. There are other eldritch creatures. There are others that act like me, and others that masquerade as other beings.