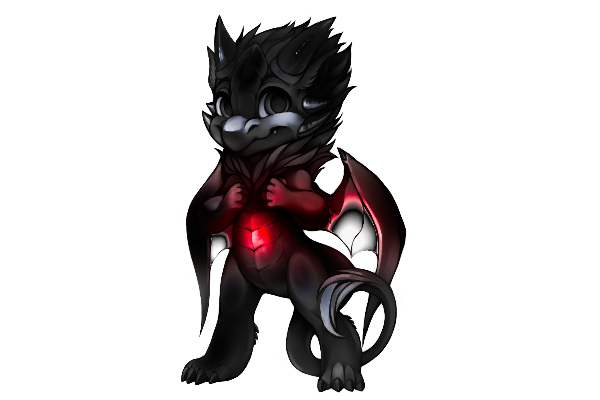 Likes: Eating, sleeping, narrating Azrael's adventures for her, small coins and shiny things.
Dislikes: Sad/horror movies, people mocking/making fun of him.
Good Habits: Narrating Azrael's adventures when she's in a good mood. Making cupcakes for his minipet friend.
Bad Habits: Getting too close to people when he talks (this is because their shadows pull him in).
How to make happy/exited: Offering to be genuine friends/standing up for him/making cupcakes with him.
How to make sad/upset: Taking his cupcakes without his permission/being rude to him.
Favorite food: Cookies.
Favorite game: N/A
Favorite thing to watch: Comedy (It helps him distract him from his surroundings and fears).


Hobbies: Practicing magic in his free time. He uses Shadow Magic, and a little Ice Magic.

Other:
-He tends to disappear for hours at a time, usually before big disasters occur.

-He may have a separate agenda from what he does at the moment, which is peacefully gardening... But no one knows for sure, and he might never actually reveal what his plan is until the last moment.

-As a shadow, he can connect with other people's shadows. This allows him to be able to sense what they feel even from a distance.

-He follows Azrael as she makes visits to all different sorts of creatures around Furvilla. When she visits, she sometimes leaves little gits behind her. If you're lucky enough, Azrael may invite you to an event. What is this event, you say? Well... you'll find out if you're lucky!

-He accompanies Azrael on her journeys, narrarating from a distance, not wanting the incident from last time to occur. [Azrael was getting annoyed by how close he had gotten (by accident) and nearly ripped his face off.] Because of this, he rarely goes near the raptor, but stays a good six feet away, usually twitching whenever she makes a sudden move. He's gotten closer to her lately.

-He was animated from her shadow, when she was a dragon. He appears in the form of a shadow dragon with red glowing eyes.

-He seems harmless, but who knows what he could do.

-As a shadow, he doesn't have just one form, but he prefers to stay as a dragon.

-He's quiet and serious most of the time, and the only time he was louder than a whisper was when Azrael offered him an entire cake for his birthday. (Or, when a new friend of his, Sunset, found out that she had magic.)

-He is an author, and likes to write short stories in his spare time.

-He can be pretty sadistic sometimes, and is extremely cynical around those he does not know.