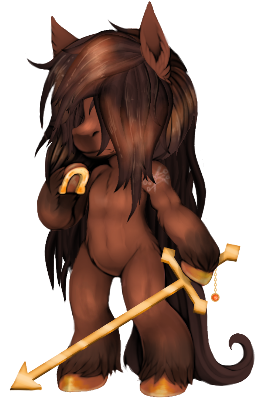 Agnes is infected with Zombipathy. Eating brains relieves symptoms for a time, but comes with memories of the brain's former life. Your doctor recommends adding hot sauce for extra flavor, but a Golden Apple a day will send the Zombipathy away.

A perpetually stoic and "unamused horse with the alchemical symbol of "iron" branded on her shoulder, as well as an odd-looking weapon in a similar design (the weapon itself isn't a sword, but is used in a "clubbing" manner.

She strives to become tough enough to take down even the most beastly of monsters, and though she falls to most of them, she gets back up, unflinching. Some say it's because she's an animated corpse, but surely this isn't the case, judging by the lack of rotting flesh.