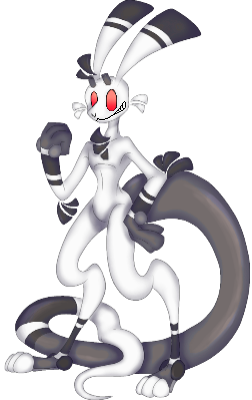 Gatsby is infected with Vampirism. Symptoms include craving blood, sensitivity to sunlight, an allergy to garlic, and changing into a bat after especially forceful sneezes. If they start to sparkle, immediately consume a Golden Apple to cure the infection.

Species: Unknown; says that his "mother" is a "giant rabbit".

Height: (A shocking) 11 feet, excluding his ears...which is a bit intimidating.

Weight: Possibly around 800 pounds, an estimation at most.

Disposition: Ridiculously enthusiastic and impossibly polite to the point that he annoys me. He seems like a genuinely nice creature, though, as he's patient with my short temper.

━━━━━━━━━━━━━━━━━━━━━━━━━━━━━━━━━━
Behavioral Observations:
• He constantly apologizes whenever he does something on accident.
• Loves to play with Moxie, my Pumpkitty.
• Appears to be a bit protective of me...
• Sometimes tries to dig a burrow in the snow piles outside.
• Drank 57 bottles of Tiger Fiz (and instantly blacked out and fell on his face in the snow, stiff as a board.)
• Can go for two weeks without any food (I gave him a lot of Baked Furlaska to make up.)
• Chews on his tail tip when he's nervous.
• Likes to be pet, for some weird reason; thumps his foot when the petting stops.
• Somehow pulls off a "bunny loaf" despite having long limbs.

━━━━━━━━━━━━━━━━━━━━━━━━━━━━━━━━━━
Noteworthy Observations:
• Capable of jumping extremely far lengths, farther than an average kangaroo.
• Rather fast, despite his size and weight.
• Sparks appear to jump from his "whiskers" when he's irritated.
• The little ball-like growths on his arms and legs seem to generate electricity (more on that below).

...I had witnessed Gatsby doing something peculiar.
One time when I was out foraging for materials, I decided to bring him along for the short trip. The place we were at was deserted, save for some animals nearby. A Walking Fur (ugh, these things creep me out) happened to approach me while my back was turned, but Gatsby noticed.
From the corner of my eye, I could see what he was doing. He quickly glided his paws over his ears, seemingly gathering an electric charge through this, gradually increasing. The round spherical "horns" on his wrists flashed for a moment, and I could see sparks flickering around his paws.
He turned to face the monster while taking a defensive posture. Electricity crackled around his paws (which were now in a "fist"), and I could almost see light emanating from the round little things on his wrists. Gatsby made a move, as if he were going to charge at the Walking Fur, but the beast clearly didn't like the sound or the light from the electricity. I saw a deep trail in the snow where the Walking Fur had retreated, wanting to get away from the disturbance.
Afterwards, Gatsby shook his paws, and the electric charge left his paws. He looked at me and asked if I was okay. I reassured him, brought him back home, and made some tea for the two of us. Of course, Gatsby finished his in one gulp, but I took my time.
I never really expected him to look out for me, but I appreciate his kindness and caring...though, I do wonder how he could generate and "hold" electricity just like that...what a strange creature he is.

I should organize my notes... -Belhor

He is currently helping me obtain "quest shards" so I can finally acquire the one thing I've been wanting for a long time.. -Belhor