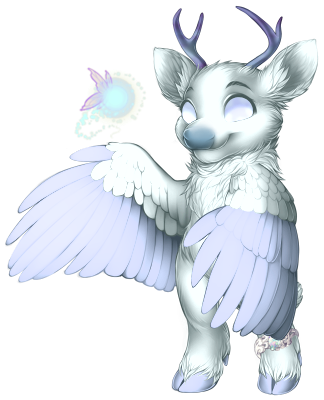 Personality: Very kind to all, but naive and foolish at times. He's never alone, with his chirpy, fast-learning fairy as his companion and guide always at his side. But they both still has a lot to learn before he can be the Protector of the Great Forest.

Name Origin: Greek "maiden" name of Persephone, the goddess of the underworld who lives there in winter, before her return in spring causes the cycle of life to continue.

Personality: A chirpy, fast-learning fairy who is Gwyn's companion and guide and always at his side. Sometimes can be a little impatient, yet tries her best not to be rude to others, even if she thinks she knows better. Still, they both have a lot to learn before Gwyn can be the Protector of the Great Forest.

Gwyn was once a young fawn, but he doesn't remember now when that once was, perhaps long ago. The animals of the forest tell him that one day, he was to be a great Prince, and watch over all the forest creatures, along with the Great Hawk with his eye in the sky. Sadly, both the young fawn and the hawk hatchling perished in the fire that only Gwyn himself does not remember.


Seeing all of this, the stars in the night sky above were saddened to see such fresh new life be snuffed from the world so soon. So, one brave star, ripened with age, offered to sacrifice itself to bring life back again. The young fawn and hawk were reborn, as one, in the form of a harpy!

The stars in the night sky, not letting the old astral star's sacrifice go in vain blessed the new harpy with a young fairy, named Cora, to learn and grow with it as a companion and aid. But alas, at a cost...


Gwyn, the young harpy, so full of life, was born blind. He remembers his life as both a fawn and a hawk, but remembers naught how he got here.


And so, Gwyn listens to tales of young and old in the Great Forest, rebirthing after the fire, and follows Cora as his faithful companion and guide, trying to make this world a little better wherever he can. And if you look closely, you might catch a glimpse of the astral star who gave life to Gwyn, shining in his blind eyes.