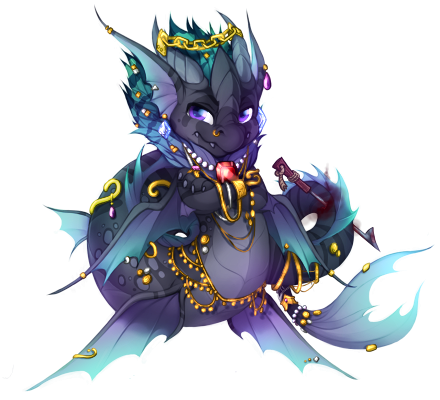 In a relationship with: N/A
--
Name: Poseidon
Pet: Lantern Gulper Eel (named "Shiney" or something of the like)
Description: An explorer in his younger years, Nicholas Finn's life changed forever when, during a training accident, a friend misfired their harpoon gun and hit the aquatic dragon instead of the intended target. Finding it far too difficult and painful to swim for great lengths of time, Nicholas moved from his Oceandome home to Tigereye Peak, where he now currently resides. He dwells in a large tank in Oliver's restaurant, where he is employed growing the aquatic herbs used in the restaurant's signature "Snowfall Salad". Patrons of the establishment enjoy observing the iconic dragon tending to his garden, and over the years had become something of a begrudging mascot for the restaurant, earning the nickname "Poseidon - Lord of the Leaves". When he wishes to leave the tank, Poseidon will slip out into a room behind the tank where a wheeled bathtub awaits him. In this device, exquisitely crafted by Professor Woolfe, he is able to move about the building with ease and engage in some grumpy, but entertaining conversation with customers. Just don't ask about the harpoon...

Relationships:
Professor Woolfe: Frequently in contact with him to discuss maintenance and modifications to his mobile tub. Grateful to the skilled blacksmith, but expresses it in a seemingly gruff manner. Professor Woolfe understands.

Oliver: Enjoys working as the restaurant gardener, though he never fully lets on. This keeps Oliver guessing constantly as to how much the dragon truly enjoys his job, and prompts him to bake treats fairly often to help aid what he perceives as a fault in their relationship. Poseidon absolutely LOVES Oliver's baked goods, and will often inform him of this with his highest compliment..."It's okay."

Jeymar: Poseidon is annoyed by him, finding his appearance to be highly ostentatious and in poor taste. Is particularly annoyed about the fact that Jeymar, when standing on land, is quite taller than him. Tolerates him because he likes Jeymar's cooking, particularly the sauce he keeps in the blue bottles.

Description below the line by: @Kiowa