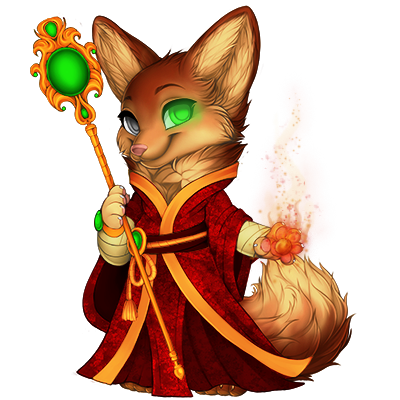 Appearance The most obvious thing about Rynn at first glance is her eyes. While one is the normal bright green of the Sin'dorei, the left is dead, appearing silvery and clouded over. Her dark red bangs often cover her blind eye unless she forgets and sweeps them out of the way. Rynn keeps her hair tied up in a braid on her right side while the rest hangs down to her lower back. She usually keeps her frail body covered up, preferring to wear robes of muted colours. She is rather short, only 4'11 and can often be found out of the way, preferring others to be in the center of attention. Rynn speaks with stuttered whispers, her voice always quiet.

Special possessions A long red dread kept in a silken pouch that is now coupled with a woven necklace inset with five gems, the most important one, a deep red crystal naturally formed into a heart. Both were given to her by Malis, her blood sister, the dread when they first became sisters, the necklace shortly before Malis died. Lastly a ring sits on her finger given to her by Zevron when they became engaged with her matching wedding band.

Personality
Meek and mild, Rynn is painfully shy and prefers to keep herself within the shadows rather than in the middle of attention. Recently she has become a little more outgoing, even as to talk to others before being introduced. There is colour to her cheeks now and the brightness in her eyes can definitely be attributed to being in love.

History Born Amirynth Niaomi Morningstar, Rynn grew up in a family of four. As the youngest she didn't have much contact with her sisters as they were already away in their own schooling. Her twin brother, Alaistair,It was said they shared half a brain each and they loved to unnerve people by finishing off each others statements. They had only just started their training in the arts of magic but he had never been too diligent with learning and Rynn often tutored him through the harder lessons, letting him 'copy' from her mind during their tests. He often stood up for her when the other kids would teased her about her stutter, something that she was always shy about. When Amirynth was attacked by a plagued bear and fell ill, he stood by her side and did all that he could to help out the healers. That day, Amirynth and many others had been chosen for the fire festival celebrations. She had practiced her dancing every eve after school to be picked, hoping to lead the festivities. No one spotted the enraged bear until it was too late and Rynn was one of the elves to be mauled before he was taken down and killed. Leg broken at the hip among other injuries, Rynn was bedridden for quite a while, her mind slipping in and out of feverish dreams. It was found out later that there was a tainted essence under the bears claws which had festered. The disease spread through out her body like wildfire leaving her incredibly weak and feeble. The life seemed to have been sapped away and she could no longer follow her hearts desire for even though her bones had healed, she would never dance again.
Alaistair stayed by her side every night, sleeping with his hand in hers. That was until she went crazy. One night, Amirynth turned upon him, crying about needing more power, more strength. Alaistair ran to be by her side, not knowing what to do to help and was caught in her attack on the demons that had been whispering to her through her delirium. He watched as Amirynth got out of bed for the first time in months under her own power and then blasted him across the room as if he was a ragdoll. He felt himself grow weak and tried to stop her from leaving the room, not wanting his family to get hurt. The last thing he saw was a sudden recognition in her eye, the other damaged beyond repair. If it hadn't been for that moment he was sure that he would have been dead. That was the last time he saw his twin sister.
Amirynth started to travel, anything to get distance between the manor and herself. For a long while she battled the demons within but it was a Sin'dorei, a powerful warlock named Kainen, who finally taught her how to keep in control. After coming to her senses, she took on the name 'Delnaria' to protect her family's name and struck out on her own to find a place to exist. It was while traveling that Amirynth met a troll who was also exploring. Malis, a Zandalari who was traveling to get away from her home village, had been caught trying to stalk a rather large dragon. It was by pure luck and fool-hardiness on the part of the male troll she had been traveling with and Rynn's own efforts that saved their lives. Malis swore that she would never leave Rynn's side until she repaid her debt and after a few years they became blood sisters. Soon Amirynth made her home in the newly re-built section of Silvermoon City, creating her lab for her works and experiments and providing a place for Malis to stay in between her forays in the jungles and other savage areas of Azeroth.