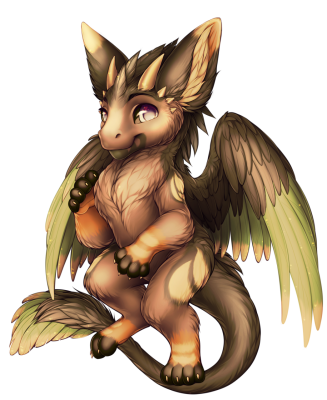 Sixer is a generally calm fellow. They're not cruel, but they're also not particularly kind either. They don't mind company but if things get too boisterous, they can get a bit snappy.
Their area of focus is on metals, specifically tarnish and rust. Because of this, they've become rather taken with seaports, which is the best place to go searching for them. Sixer's main source of energy is rust and copper coins, which they accept as payment for services or favors.
They prefer to roost in high places, using their strong wings to glide from ship masts to buildings and trees, only going to the ground to eat or if they're summoned. They also have an inherent trait of being surrounded by fair winds, so seaports are more than happy to allow the dragon to stay as long as they like.